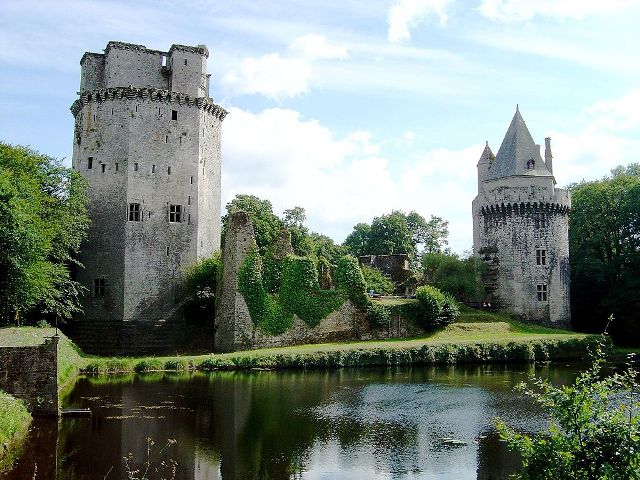 Location: Elven, in the Morbihan departement of France (Bretagne Region).
Built: 13th-15th century.
Condition: Restored.
Ownership / Access: --
Notes: Forteresse de Largoët, also known as the towers Elven, is a medieval site in Elven, in Morbihan, 13 km from Vannes. It is the subject of several protections as historical monuments.A castle is mentioned for the first time in 1020, as possession of Lord Elven Derrien 1, but the building that we know today was built between the thirteenth and fifteenth centuries. The area becomes the property of Malestroit family in the thirteenth century. The parties of Blois and Montfort compete during the war of succession of Brittany, then it falls to the family of Rieux in the fifteenth century. It was during this time (between 1474 and 1476) as John IV, lord of Rieux, it retains Henri Tudor, Duke of Richmond, later Henry VII of England. In 1490, Charles VIII dismantles the castle, but it was restored under the leadership of Anne of Brittany. Nicolas Fouquet, investing in land that earns a secure income, bought the castle and its 45 000 ha in 16562, and after his death it was sold to Michel Trémeurec and remains in his family. November 30, 1799, during the chouannerie, the Battle of the Tower of Elven takes place near the castle. In the nineteenth century it comes to destroy Largoët, given its state of disrepair but is saved from demolition thanks to the action of Prosper Mérimée, which is classified as historical monument in 1862. Since the 1970s, we started undertake its restoration. In the years 1980-1990, the site is the venue for sound and light shows taking place during the summer and were very famous in the region. The spectators sat on bleachers located opposite the lake and contemplating the conflagration of the towers during the reconstitution of tales and legends Lancelot, Tristan and Iseult ... Elvinois played the leading roles and were many participate as extras. Fireworks clôturait each performance. Unfortunately, these shows, organized by the Association for the Renaissance Castle Largoët (ARCL) ceased in mid 1990. In 2002, a sound and light in Breton language was held there.

How To Get To Forteresse de Largoët (Map):