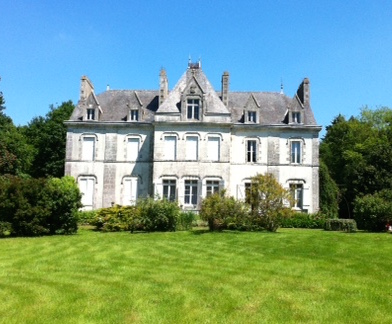 Location: Grand-Champ, in the Morbihan departement of France (Bretagne Region).
Built: 19th century.
Condition: Restored.
Ownership / Access: --
Notes: Château du Reste is a French château located in Grand Champ, in Morbihan in Brittany. Rebuilt in the nineteenth century in the lines of a castle of the great century, the current building, in stone covered tufeau, consists of a front building with three openings extending from either side of wings each have two openings. Each opening is topped by skylights in the roof pointed gable. The central one, the highest, is decorated with a coat of arms of the Chohan (quartered the 1st quarter and fourth quarter of the 2nd party). The roof with four slopes of the forehearth terminates in a short planar surface surrounded by a gate ring. The castle chapel, dedicated to Our Lady, was rebuilt in the seventeenth century and was home to the sixteenth century steles from the abbey Lanvaux. It was restored in 1983.