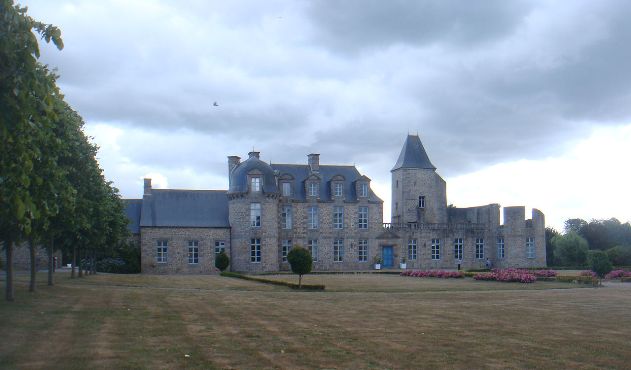 Location: Parigné, in the Ille-et-Vilaine departement of France (Bretagne Region).
Built: 17th century.
Condition: Ruined.
Ownership / Access: --
Notes: Château du Bois-Guy is a castle dating from the seventeenth century, situated in the municipality of Parigné in Ille-et-Vilaine. Owned by the Pichot family in the middle of the fourteenth century, the area between the play of marriages in the possessions of the family Gaullaye (GAULAY) as lord of Bois-LeBon in 1513. In the town of Tremblay still exists days, a beautiful Gothic mansion that bears this surname 3. The castle will remain for two centuries in their heritage. On the death of the last member of the family, Jean Picquet, Chief Clerk to the Parliament of Brittany, Lord of La Motte and lord of Melesse, bought the castle in 1703. His great grand-son Alexandre-Marie will marry in 1769 in Fougeres with Good Josephus Du Bois-Lebon and had eight children, including Guy Picquet of Boisguy born in 1772 and Aimé Picquet du Boisguy born in 1776. The castle is therefore up to the family... Listed in 1802, and its property in the Bécannière Javené by Madame du Bois-Lebon, mother of our chouan, the estate was sold in 1804 to Mr Dubuat, who bequeathed the property to his daughter, wife of Henri Charles Estanger. Ferns This is a notary who will eventually buy the building 4. The buildings are transformed into a large farm-juice before World War II. But the castle and outbuildings deteriorate. In the 1980s remain only blind windows and wall sections lonely, romantic silhouette devil but real ruin.

How To Get To Château du Bois-Guy (Map):