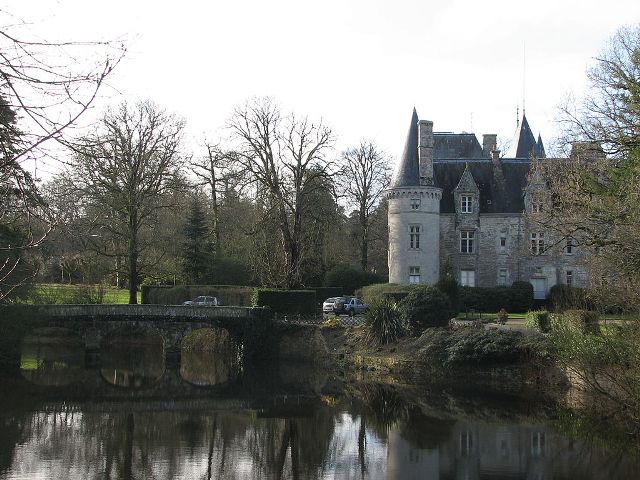 Location: Trédion, in the Ille-et-Vilaine departement of France (Bretagne Region).
Built: 15th century.
Condition: Renovated.
Ownership / Access: --
Notes: Château de Trédion is a castle located in Trédion in the French department of Morbihan.Built in the 1350s, the Manor of Trédion was the property of the Dukes of Brittany. The vast forests around him made him an appointment of hunting privileged. Big names possessed over the centuries Lands Trédion. Among them, Malestroit, John IV of Rieux, the Marquis de Nesle, Guy-Paul de Coligny, the Princess of Salm, Peter II of Sérent, Charles Fouquet in 1683, a distant relative of the intendant Fouquet, behind legend Treasury Trédion who would be buried at the foot of an oak ... if then succeeded Bourgeois and some people Petite Noblesse. If the Castle of Trédion had famous owners during this period, he received more illustrious guests yet. King Francis I that August 31, 1518 is restored and lodged at the "Castle" one night before joining the next Vannes, at the time "small city of 9,000 souls." The Queen Mother Catherine de Medici regent of France and host of Coligny, lived at the Chateau at least two weeks in May of the year 1570 (two letters from Trédion testify). It's July 21, 1834, Hippolyte du Fresne of Virel acquires Castle and Lands Trédion. He established in 1840 a "Blast Furnace" for mounting the cast objects, and began the transformation of the mansion into a "Castle". In 1977, the estate is sold by the heirs of Virel Guy Turpin Real Estate developer in Vannes. Considerable renovations are undertaken in both the castle, in the park and continue today.

How To Get To Château de Trédion (Map):