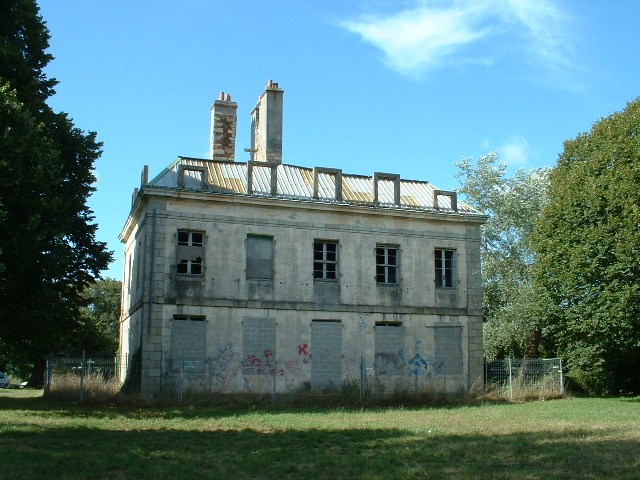 Location: Ploemeur, in the Morbihan departement of France (Bretagne Region).
Built: 1784 and 1786.
Condition: Ruined.
Ownership / Access: --
Notes: Château de Soye, is a building located in the locality in the municipality of Soye Ploemeur, Morbihan (France).Castle Soye, located in the commune of Ploemeur, was built between 1784 and 1786 for Laurent Esnoul Deschateles, owner of the East India Company and the nephew doctor and philosopher Julien Offray de La Mettrie. It is in this castle that is born engineer shipbuilding, inventor, and politician Henri Dupuy de Lome in 1816. Castle Soye will also be the scene of poisoning perpetrated by Hélène Jégado in 1841 before being sold to the viscounts of Solminihac then to the city of Lorient, which will transform into outdoor school, hostel and cited works dedicated to childhood. November 15, 1936 will receive the official visit of Jean Zay, Minister of Education and Fine Arts from 1936 to 1939. After World War II, the castle and its grounds host a provisional city of barracks to house the victims of the destroyed city. In 1986, the Castle of Soye is proposed in the foundation of Jean-Luc Lahaye singer to be turned into a reception center. The project fails and the castle, whose roof was burned in 1988, falling apart. A project to rehabilitate the garden of the eighteenth century, its orangery and a temporary barracks is being cited. May 28, 2015, the town bought the estate Plœmeur Soye in the city of Lorient Lorient Agglomeration, previous owners, to begin his réhabilitation.

How To Get To Château de Soye (Map):