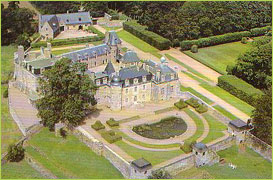 Location: Lanvellec, in the Côtes-d'Armor departement of France (Bretagne Region).
Built: 14th century.
Condition: In good condition.
Ownership / Access: Privately owned.
ISMH Reference Number: PA00089300
Notes: Château de Rosanbo is a castle located in the commune of Lanvellec, Côtes d'Armor department, in France. It is the subject of a registration as a historic monument since 22 March 1930.In the same family since the nineteenth century, the first building is a fortified castle on a strategic promontory located 6 km from the Bay of Saint-Michel-en-Greve to prevent the rise of Bo to northern invaders. In the fifteenth century Gothic mansion built adjoining the castle. In 1688 Genevieve Coskaër Rosanbo last heir of the earth Rosanbo wife Louis Le Peletier's son Claude Le Peletier, former Provost of the Merchants of Paris. Louis XIV allow them to raise up the name of Rosanbo and to use the title of marquis. In 1794, the Rosanbo, their daughter Aline and her husband Jean-Baptiste de Chateaubriand, elder brother of the writer were guillotined. Their son Louis will not return but his descendants yes and Alain Marquis Rosanbo opened the castle to the public in 1958.

How To Get To Château de Rosanbo (Map):