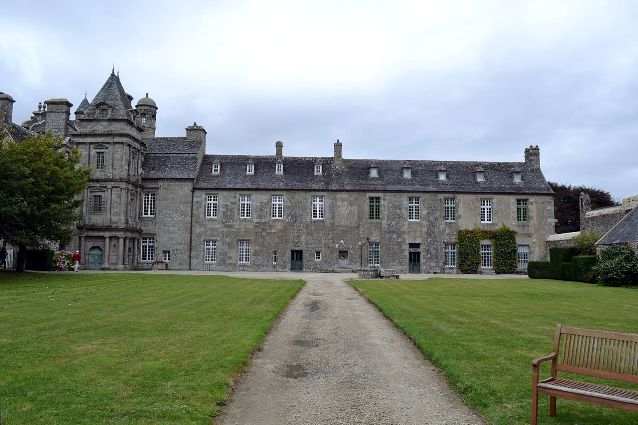 Location: Plounévez-Lochrist, in the Finistère departement of France (Bretagne Region).
Built: 19th century.
Condition: In good condition.
Ownership / Access: --
ISMH Reference Number: PA00090263
Notes: The Château de Maille is located in the municipality of Plounévez-Lochrist, in Finistère department.The castle is built in the nineteenth century under the leadership of Tanguy de Kermavan (or Carman) in lieu of an ancient castle, the castle of Coëtseizploë (wood of the seven parishes). Maurice de Carman and his wife Jeanne de Goulaine, probably influenced by Philibert Delorme, who gave it its present form in 1555 and had built the chapel of Kermeur. Subsequently, the land under its jurisdiction are erected in marquisate by Louis XIII and pass into the hands of Maille, rich Tours Family (1577), Rohan-Chabot (1747), the Cadeville (1789), the Dein (1812 ) of Nielly (1900), The monument is the subject of a classification as historical monuments since December 8, 1981 (facades, roofs, stairs, fireplaces) and an inscription since April 19, 1990.