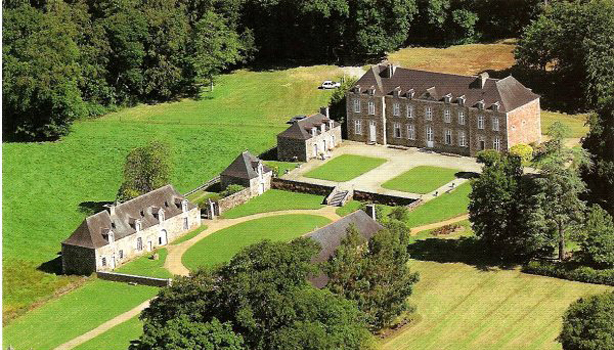 Location: Béganne, in the Morbihan departement of France (Bretagne Region).
Built: 17th-18th century.
Condition: In good condition.
Ownership / Access: --
ISMH Reference Number: PA00091022
Notes: Château de lehelec is a house built in the seventeenth century by Jean Le Mintier, Lord of Léhéléc, gentleman of the House of the King (Louis XIV). It is located in the town of Béganne in the department of Morbihan.Léhélec Castle was built circa 1660 by John Le Mintier, Lord of Léhélec, who was one of the 100 pages of the King's House. This is a Louis XIII style castle; what strikes one first is the appearance of pink stone taken from nearby quarries of ferruginous shale Béganne; those around doors and windows is made with granite Péaule and everything is softened by the whiteness of the tufa stone also used for skylights. North pediment seen the arms of Le Mintier that read "Gules a silver cross engrailed" and those of Bocan Léhélec of which read "Azure a silver band charged with three crescents of sand with two gold clover ". Inside, François Le Mintier, Marquis of Léhélec, colonel of the Horse Guard of Louis XVI commissioned a remarkable flight of stairs, which is said that the King, connoisseur ironwork, would have made corrections on the plan presented his colonel. The whole is listed as a historic monument since 4 October 1966 and is open to visitors. We just find Léhélec a stele and a tumulus (tomb) Vénètes, dating from 500 BC. AD.

How To Get To Château de Léhélec (Map):