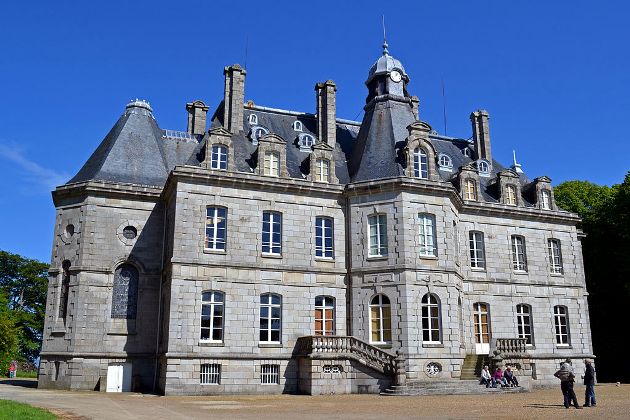 Location: Saint-Pol-de-Léon, in the Finistère departement of France (Bretagne Region).
Built: 18th century.
Condition: In good condition.
Ownership / Access: Privately owned.
ISMH Reference Number: PA29000031
Notes: Château de Kernévez is a castle styles primarily neoclassical, at the entrance of the city of Saint-Pol-de-Léon (Finistère), Brittany. Kernévez Castle was built shortly after 1850 for the family of Guébriant on the site of the castle of La Villeneuve. The old castle of La Villeneuve, built on family land in the Forest and attested in the Middle Agen was rebuilt in the early seventeenth century by the Poulpiquet Coat-Lez. This original castle still existed in 1848. The fact remains today that the carved fireplace, dated 1627, reused in the kitchen of the current castle. In the early nineteenth century, the castle passed by marriage to the family of Guébriantn and takes the name of Kernevez. A vast area of ​​redevelopment campaign was then undertaken. Are arranged around the castle stables, a cart shed and a greenhouse. From either side of the main entrance, houses two guards meet the farm located on the other side of the road out of the park. All these buildings is contemporary to the castle. During the second half of the nineteenth century in Leon, ten farms-farms called Guébriantn obeyed a precise model guided by a health concern. For this, the granite is the material required for both the main building dependencies. Part of the park is devoted to cattle. This area is very representative of the movement back to the land of the great royalist aristocracy in the mid-nineteenth century. The gazebo is off the top of the chapel in 2011 but its deterioration requires an identical reconstruction before replacing the top of the dome in October 2014.

How To Get To Château de Kernévez (Map):