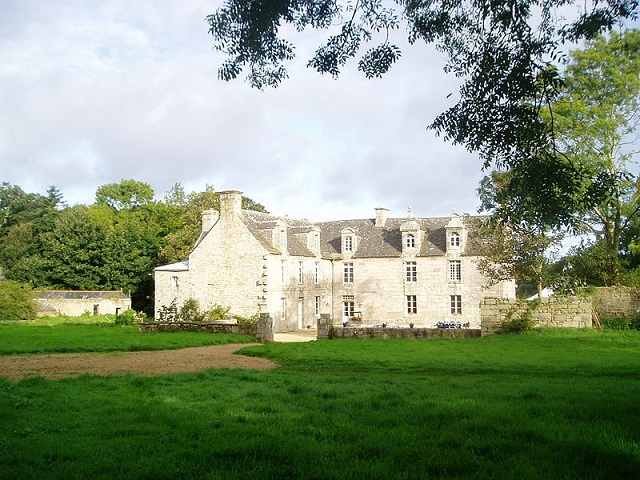 Location: Cléder, in the Cotes-d-Armor departement of France (bretagne Region).
Built: 13th century.
Condition: In good condition.
Ownership / Access: --
Notes: The castle of Kermenguy is a castle located in Cléder in the French department of Finistère.The castle of Kermenguy was originally an old dungeon dating from the thirteenth century. It was replaced by a beautiful Breton manor completed in 1632, flanked by two turrets and completed with another wing before the revolution, at which time these parts were destroyed. The current manor is fenced by a pretty gallery style Louis XIII characterized by its small pillars very close that are the hallmark of the time. The manor, the balustrades and the pillars of the alleys and the dovecote are inscribed on the supplementary inventory of historical monuments.At the revolution the north wing had to burn as well as one of the turrets. During this troubled period the mansion served as a hiding place for non-sworn priests. It was at this time that Nicolas de Kermenguy helped Monseigneur de la Marche, bishop of Saint-Pol-de-Léon, to go into exile on the island of Jersey. The woods of Kermenguy served as a headquarters for the counter-revolutionary troops during the Battle of Kerguidu in March 1793 (Treflaouenan, the mill of Kerguidu, see also the book of Lan Inizan "The battle of Kerguidu").In 1810 the chapel in the park to be accessible to the whole neighborhood, too far from the parish church, was destroyed and replaced by an oratory inside the house.The land and castle of Kermenguy have been owned by the same family for more than six centuries. In 1400, Yvon Derian (or Derrien) son of the Lord of Pratalan married Basile de Coëtaudon, Dame de Kermenguy and Kerabret. It is at this time that the name of Kermenguy begins to be taken over as surname. The Derrien family, of which Yvon Derrien is descended, has distinguished himself by giving a bishop (1227 to 1238), a crusader (Guillaume Derrien in 1248), and a seneschal of Britain (Hervé Derrien in 1378). The Kermenguy were illustrious by giving a knight of Saint-Michel (Jacques de Kermenguy in 1647), a knight of Saint-Lazare in 1721, two pages of the king in 1710 and 1750, a page of the queen in 1755, Independent (Emile de Kermenguy, deputy from 1871 to 18931), many mayors and priests recently.

How To Get To Château de Kermenguy (Map):