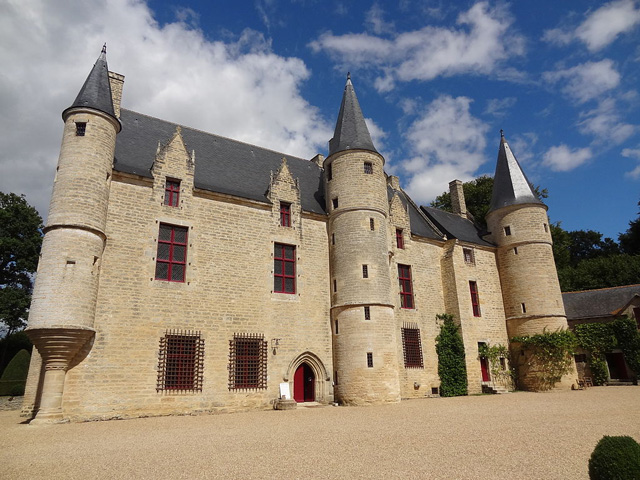 Location: Quiou, in the Côtes-d'Armor departement of France (Bretagne Region).
Built: 14th century.
Condition: Restored.
Ownership / Access: Privately owned.
ISMH Reference Number: PA00089567
Notes: Château de Hac is a fifteenth-century castle located on the territory of the municipality of Quiou, south of Dinan, in the Côtes d'Armor. It is the subject of a classification as historical monuments since September 1993, while the area around the castle are registered in February 20122.Initially, the area was a former hunting lodge of the Dukes of Brittany. It was once the prerogative of families Arthur de Richemont, Jean Hingant, Tournemine and Rieux. In the 1380-1390 years, when the Hundred Years War, a mansion which remain the foundation was built by Guillaume de Saint-André, a diplomat of Duke John IV of Brittany. At his death, the field returned to Arthur de Richemont, son of the Duke, who gave it to the family BinTin whose heiress married Jean Hingant, pushy and powerful chamberlain of the Duke of Brittany Jean V the Wise. The present castle was built in 1440-1448 by Jean Hingant and became the center of an important agricultural area in which he lost the property in 1450 after being involved too closely in the murder of Gilles de Bretagne, strangled in his cell . Then the castle into the patrimony of the Tournemine family before being sold in 1686, and again in 1770 the lord of the Reslou Tisonnaye, became mayor of Dinan, during the French Revolution. It was the subject of a study and diagnosis of paintings and furniture in 1997.

How To Get To Château de Hac (Map):