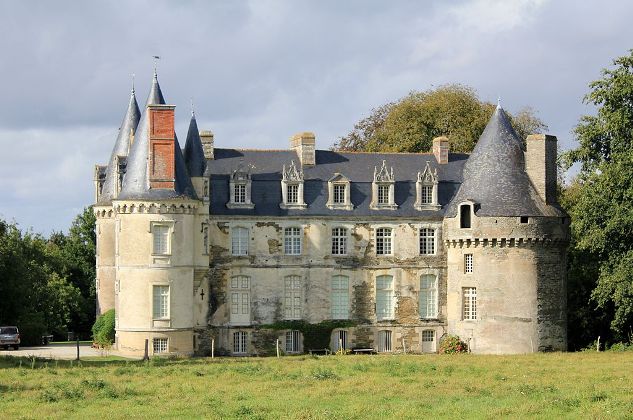 Location: Val-d'Oust, in the Morbihan departement of France (Bretagne Region).
Built: 14th-17th century.
Condition: Ruined.
Ownership / Access: Privately owned.
ISMH Reference Number: PA00091150
Notes: Château de crevy (or Die) is old sergenterie féodée Ploermel fourteenth century, located in the delegate town of La Chapelle-Caro (municipality of Val-d'Oust) in the department of Morbihan, France.It is an ancient Roman settlement. Successive property of Bonabes families (around 1149), Derval, Rouge (the fourteenth century), Châteaugiron, alias Malestroit (the fifteenth century), Chastel, MONTEJEAN, Tournemine Quelenec (in 1563), Rogier (in 1602), Descartes ( in 1644), Brilhac (in 1741), Humbert, Brilhac (in 1809), the Poulpiquet Halgouet (in 1812), Breil de Pontbriand La Caunelaye (in 1816). The manor was built in the county in 1697 in favor of François Rogier. The castle is the heart of the conflict (during the wars of religion) that opposes Malestroit family is Catholic in the Rohan family Josselin which is Protestant. The Duke of Mercoeur was stationed; the king of the party tried in vain to seize it. The castle was very reworked in the eighteenth century by the family of Brilhac and in 1855 by architect Jacques Mellet (addition of a west to the main building, flanked by two towers). The complex, restored in 1966 by Monique Dunan (already costume designer Sacha Guitry, Marcel Carné, Jean Renoir, Claude Autant-Lara, and for the television series (Version 1972) Cursed Kings), hosted a costume museum , disappeared after the death of the owners. The two facades of the seventeenth century are listed as historical monuments in 1925, the southeast corner tower being, meanwhile, registered 1970.

How To Get To Château de Crévy (Map):