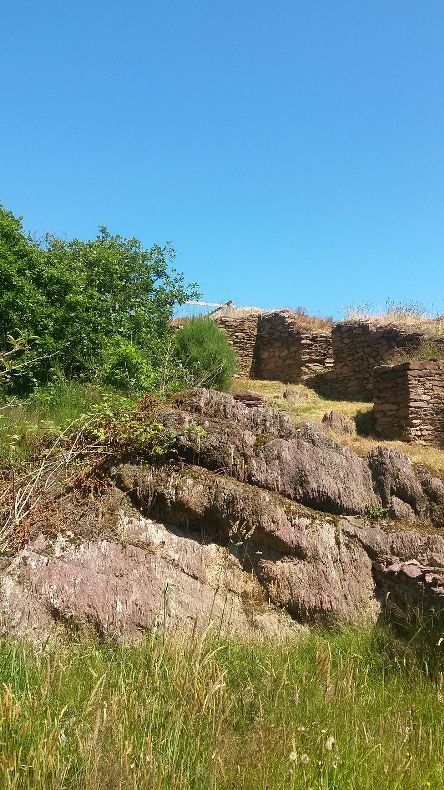 Location: Iffendic, in the Ille-et-Vilaine departement of France (Bretagne Region).
Built: 11th century.
Condition: Ruins.
Ownership / Access: --
Notes: Château de Boutavent is located in the town of Iffendic, France. The ruins of the castle, built in the Middle Ages, are located on a natural rocky outcrop at a place called Boutavent. The estate, surrounded by the forest of Paimpont and pond Boutavent, covers more than two hectares. There is evidence that the thirteenth and fourteenth centuries, the castle belonged to the lords of Montfort. It was thus part of all the possessions of the Montfort family with castles Comper, Montfort, Montauban and Gael. The history of the site is accompanied by legends. It is said that in the seventh century, the castle was the residence of Judicaël king of Dumnonia, and it was the meeting place between the King and St. Eloi, sent to settle a border dispute between Breton and French. The castle is divided into two classic elements on this site: a court and a lower court separated by a deep ditch. Four buildings, which could be dwelling buildings are located on either side of the farmyard. The wall and the elements of the speaker of the lower court are still clearly visible. In the sixteenth century, we know that the castle was in ruins. The circumstances of the destruction of the fortified site of Boutavent remain mysterious. Perhaps he was dismantled during the War of Succession (second half of the fourteenth century) or in 1373, during the campaign of the constable in Britain, but there is no evidence that the castle has longer lived thereafter. Many local nineteenth-century authors have written about Boutavent as Poignand particular, Vigoland or Oresve. Although these writings are rare testimonies on the website, however we can not trace the entire history of the castle, the sources being too low. The castle has not been excavated yet, but various vestiges consolidation campaigns have been held since 2006, in which was found archaeological material (slate, ceramics, floor pavements and glazed tiles). The site, managed by Montfort Community, is open to the public since 2005. The maintenance, consolidation remains and enhancement of Boutavent are conducted in collaboration with the museum of the country of Montfort, the regional service archeology and the insertion Eureka Jobs Services site.

How To Get To Château de Boutavent (Map):