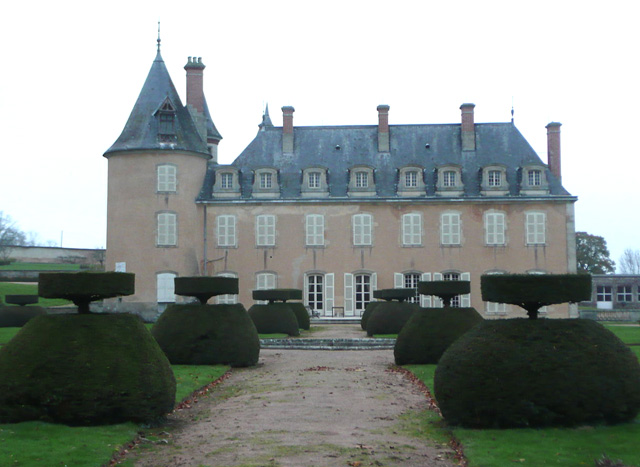 Location: Verosvres, in the Saône-et-Loire departement of France (Bourgogne Region).
Built: 13th century.
Condition: Restoration and renovation in 19th century.
Ownership / Access: Private property and not open to visitors.
ISMH Reference Number: PA00113524
Notes: Château du Terreau is located on the Soil Verosvres town in Saône-et-Loire, at the foot of the hill on which the town is located. It is the subject of a registration as a historic monument since December 28, 1984.Surrounded by dry ditches, building consists of a main building and two wings surrounding a square courtyard. Covered hipped roofs, these buildings include a ground floor, a floor pierced by segmental arched windows and a lintel height of floor lit by gabled dormers discovered. One that is at the center of the facade of the main body facing the courtyard is entered between two pilasters supporting a pediment and flanked by curved fins. The west front is flanked on the corners two round towers at slightly talutée base, remnants of the old fortress. At the southwest tower is adjacent capped a circular turret, as she, with a conical roof. A balustrade terrace connected to the park by a large stone bridge exists between the two towers. A pavilion of the nineteenth century, including a basement, two square floors and an attic floor penthouse stage under a broken roof is backed by the north wing. It is drilled to the east of a high French windows arched balcony overlooking a support-body curve wrought iron. The set is preceded, in the center of a grid, a gate piers surmounted bosses holders lions coat of arms of Thibaud de Noblet and Saulx-Tavannes. The castle is private property and can not be visited. The castle grounds, its outbuildings, the chapel, the gate, the moat and bridge, and the French park, its arbor and its architectural and decorative elements are listed historical monument by decree of December 28, 1984.