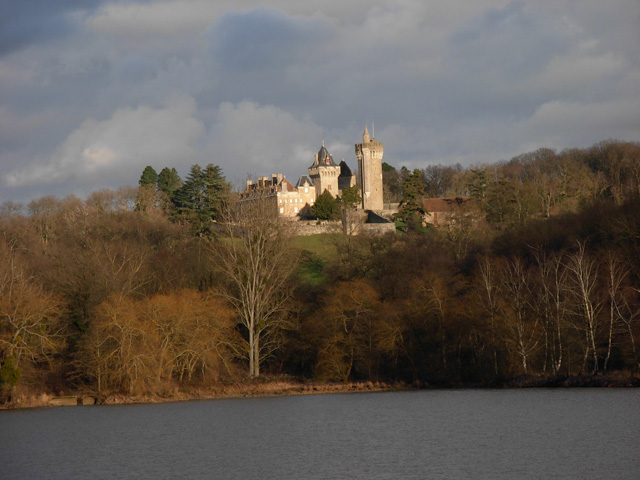 Location: Blanzy, in the Saône-et-Loire departement of France (Bourgogne Region).
Built: 13th century.
Condition: Restored in 18th century.
Ownership / Access: Private property and cannot be visited.
ISMH Reference Number: PA00125327
Notes: The Chateau du Plessis is located in the municipality of Blanzy in Saône-et-Loire, on a patio ledge overlooking the pond du Plessis.This castle is inhabited and can not be visited.It is the subject of a registration as a historic monument since June 1993.The castle was probably built in the eighteenth century and originally included a walled enclosure accessed by a drawbridge and a gatehouse. It was restored in the eighteenth century and then rebuilt from the nineteenth century. The Chateau du Plessis is a set (47 m by 43 m) of several buildings around a rectangular courtyard. The oldest tower is the square tower of the Madeleine which dates from the fourteenth century and to which was added in the nineteenth century, an octagonal turret. The main building and three terraces date from the time of the work of Blaise Quarré 1750. It was also close gaps and turned the entrance to the southwest to the northeast. The castle was radically altered in the late nineteenth and early twentieth century in a neo-Gothic style inspired by Viollet-le-Duc.

How To Get To Château du Plessis (Map):