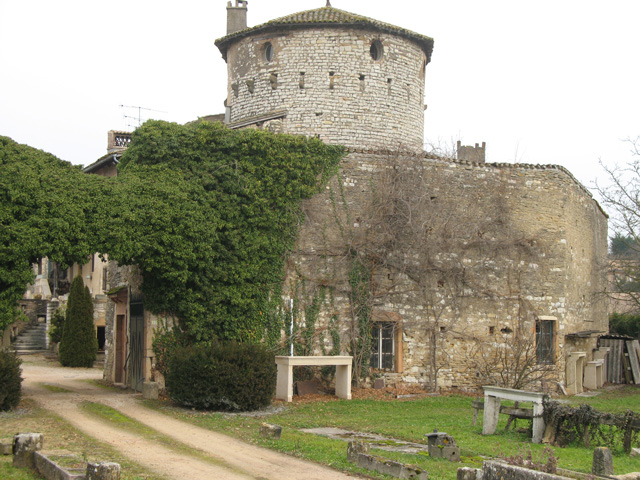 Location: Sancé, in the Saône-et-Loire departement of France (Bourgogne Region).
Built: 13th century.
Condition: Rebuilt in 14th century.
Ownership / Access: Private property. Not open to public.
Notes: Château du Parc is located in the town of Sancé in Saône-et-Loire, in slope flank.The outer walls, partly preserved, describe an irregular polygon. Thicker than a meter tall and six to seven meters, they were, until 1835, surrounded by moats of living water that crossed a drawbridge. Inside the chamber, which are backed various common, rises a circular tower 18 meters high which rests against the north, the old main building, itself flanked by a small round tower. The keep has a vaulted ground floor devoid of any opening, arched floor of edges occupied by a chapel lit by three narrow windows with pointed arch and a second stage connected to the previous by a staircase in the thickness of wall outside that belt a row of stone consoles in support of hoardings which gave access three circular openings. The home itself has a ground floor equipped with a large fireplace and floor with beamed French ceiling, a small door communicates with the chapel. The various buildings, including the tower, flat roofs are covered with hollow tiles. The whole seems to have been built in the early thirteenth century and then rebuilt in the fourteenth century and fifteenth century.The castle is privately owned and not open to visitors.

How To Get To Château du Parc (Map):