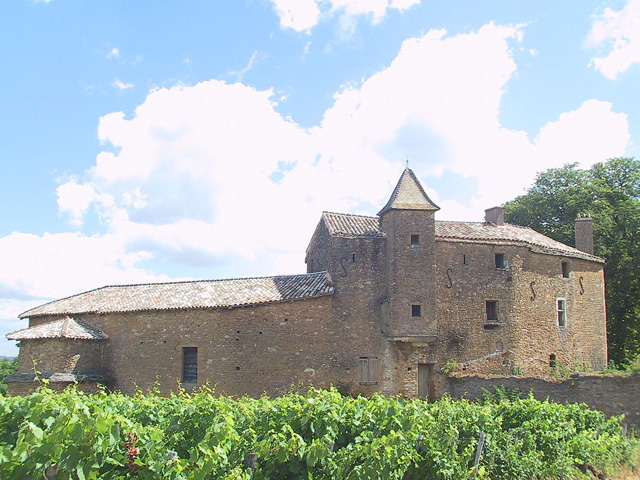 Location: Vinzelles, in the Saône-et-Loire departement of France (Bourgogne Region).
Built: 12th or 13th century.
Condition: --.
Ownership / Access: It is private property.
Notes: Castle of Vinzelles is located in the town of Vinzelles in Saône-et-Loire, on the slope of hill, overlooking the village. It is the subject of a registration as a historic monument since 29 October 2003.Construction, pentagonal, still retained in the seventeenth century the remains of the double walls and trenches defending the east, south and west. The eastern curtain, which opened in the entrance, has disappeared, but four sides of the enclosure remain. The bases of the towers flanking large round this entry, a small oblong and round turret overlooking a square in the west are the only defense elements still identifiable. The courtyard is surrounded by buildings on three sides. To the south, a massive and almost blind construction, breakthrough gunboats and defended to the court by a small gatehouse on projections consoles, comprises on the ground floor of vaulted rooms of edges and a spiral staircase; She is flanked by an open gallery with a roof hollow tiles rests on stone columns. The main house, located to the west, contain a vaulted chapel edges and the first floor, a large room whose walls are covered with old paint depicting hunting scenes.The castle, private property can be visited during July and August and during the Heritage Days.

How To Get To Château de Vinzelles (Map):