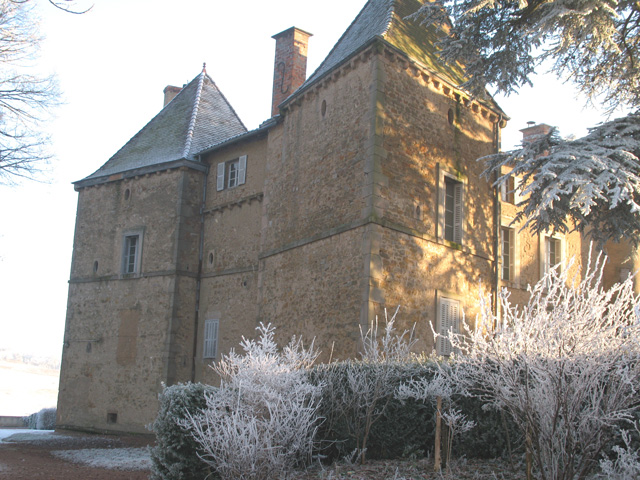 Location: Tramayes, in the Saône-et-Loire departement of France (Bourgogne Region).
Built: 1598.
Condition: Restored in 1825.
Ownership / Access: The castle is a private property. The park is open to the public.
ISMH Reference Number: PA00113510
Notes: Château de Tramayes is located in the village of Tramayes in Saône-et-Loire, at the pass that separates the valleys of the Grosne and Valouze. It is the subject of a registration as a historic monument since March 14, 1977.The building, which originally stood inside a large rectangular enclosure confined towers, consists of a body of rectangular building, flanked by two square towers at 45 °, a square tower over higher than previous and a turret overlooking. The west facade is connected to the park by a porch railing. The eastern facade, preceded by a balcony connecting the two towers at the ground floor, is pierced at its center with a door placed in a boss coaching vermiculé one in two, crowned by a curved pediment interrupted the only vertical slot of a drawbridge disappeared. Above this gate remains the three consoles a bretèche. A headband reigns all around the buildings.