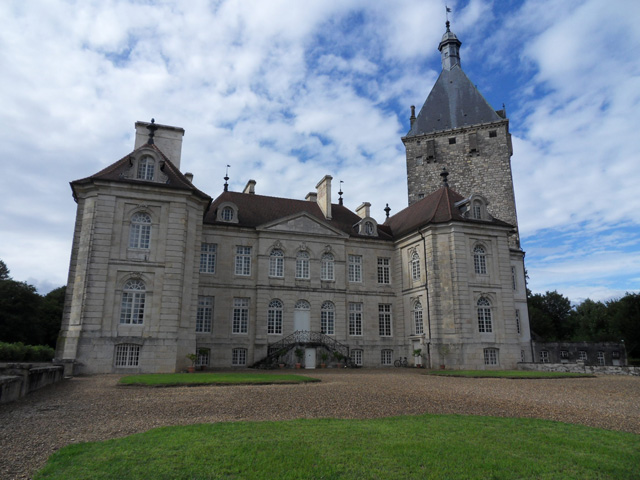 Location: Talmay, in the Côte-d'Or departement of France (Bourgogne Region).
Built: 13th century.
Condition: In good condition.
Ownership / Access: Family Bordeaux-Montrieux Bonhoure.
Opening Times: Check their website for more info.
Price of Admission: Check their website for more info.
ISMH Reference Number: PA00112688
Notes: Château de Talmay entire eighteenth century Talmay located in the department of Côte-d'Or and the Burgundy region. The modern castle with classical architecture follows a plan in U. It is divided into a central body with carved pediment and two wings, all built with big regular yellow stone blocks. Entry to the building is via the front and rear of the central body via two staircases double flight of stone. The rear entrance opens onto a large terrace, and access to the garden via a monumental stone staircase, guarded by two sphinxes carved in stone. The front facade is pierced with four doors (three allowing access to the basement, and allowing access to the main body), twenty-seven French windows and four skylights. The back cover is pierced with two doors (one under the staircase, allowing access to the basement and the other allowing access to the central body), twenty-four French windows, and four skylights. The facade is pierced sinister ten French windows and two skylights. The facade dexter, adjoining the tower, is pierced with a door giving access to the kitchen, the chapel and the tower, and eleven French windows and two skylights. The park, with an area of ​​seven hectares, is bounded by two arms of the Vingeanne, a reach, says the mill and a wolf break. It consists of a French garden, bordered by hedges of hornbeam in the back of the castle; a rounded comprises eight 1752 plane trees in the park; an orchard of 280 apple, pear and plum trees, lined with flowers, before the sinister facade; and a herb garden and a boxwood maze, located between the orchard and the facade of the castle. Everything is entrenue Mr. Socier, gardener.