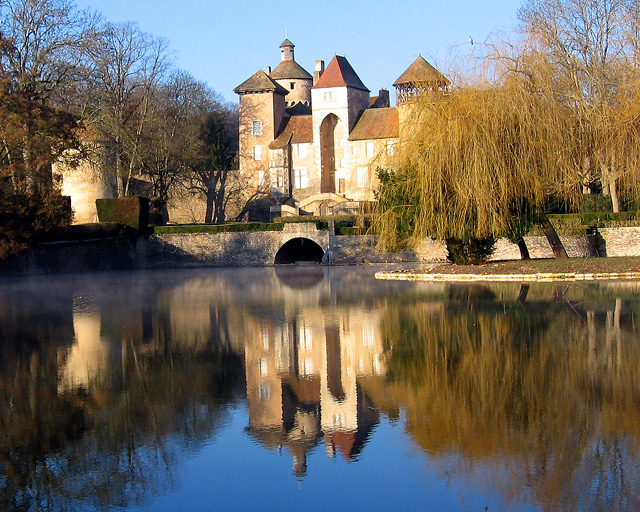 Location: Sercy, in the Saône-et-Loire departement of France (Bourgogne Region).
Built: 12th century.
Condition: Restored in 1815 to 1819.
Ownership / Access: Private property but open to the public.
ISMH Reference Number: PA00113477
Notes: Château de Sercy is a castle of the twelfth century to the fifteenth century changed Sercy in Saône-et-Loire in Burgundy. It is the subject of a classification as historical monuments since May 1974.This is one of the best preserved medieval castles and the most curious of the region. It included, in the east, a first chamber of which only the circular tower-dovecote. It was reached by a drawbridge located south. A fixed bridge is located was substituted him after partial destruction occurred during the Hundred Years War. He is now buried under a lawn that above a pond. The second chamber comprised between two triangular course which only remains that of the south, the castle itself, whose buildings, gathered around a small courtyard, form an irregular quadrilateral flanked by towers of various types.

How To Get To Château de Sercy (Map):