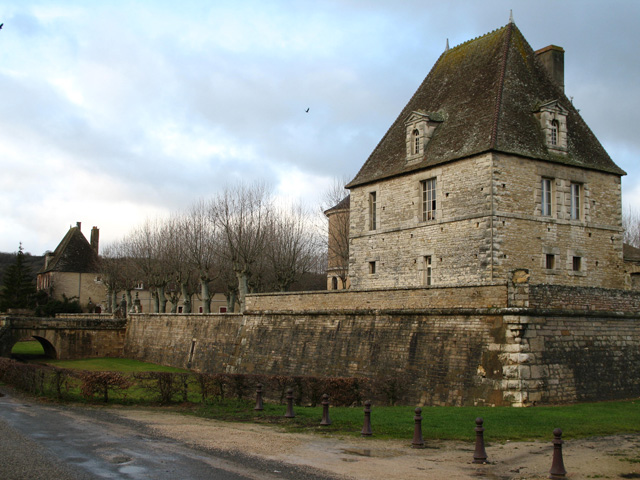 Location: Sennecey-le-Grand, in the Saône-et-Loire departement of France (Bourgogne Region).
Built: 10th or 11th century.
Condition: --.
Ownership / Access: --.
ISMH Reference Number: PA00113472
Notes: Sennecey-le-Grand Castle is located in the town of Sennecey-le-Grand in Saône-et-Loire, on flat ground south of the town. What remains of the buildings is the subject of a registration as a historic monument since 23 June 19371. The esplanade, in addition, became classified site since April 12, 1938.Ditched the original castle was roughly rectangular, flanked by circular towers. In the fifteenth century, it had been reinforced by two large towers flanking the front door, which disappeared at the beginning of the nineteenth century. The sixteenth-century works, meanwhile, essentially carried on the drilling of high windows and the transformation of the layout and decor of the house of the great body leaning against the north curtain. They were complemented by the development after filling of ditches, a large compound surrounded by crenellated curtain, confined and surrounded bastions of white water moat, which included the old farmyard which was located the chapel and was preceded north of a stone bridge leading to a main building flanked by pavilions with pointed roofs crowned by statues of Jupiter, Venus and Juno. The facades were covered with sculptures. Everything disappeared except four corner pavilions, foundation walls, a part of the moat, two stone bridges and common. In the east wing, common that house the town hall, opens a door semicircular between two fluted pilasters, surmounted by an entablature on which alternate bucrania and rosettes, separated by triglyphs, supporting a shrine niche concave above which is inscribed the date 1592. A similar door, adorned with medallions, provides access to the western wing. North pavilions built on the bastions of which still retains a cartouche with the arms of Bauffremont, include angles chaining, headbands and frames berries holed boss.The castle is owned by the municipality.

How To Get To Château de Sennecey-le-Grand (Map):