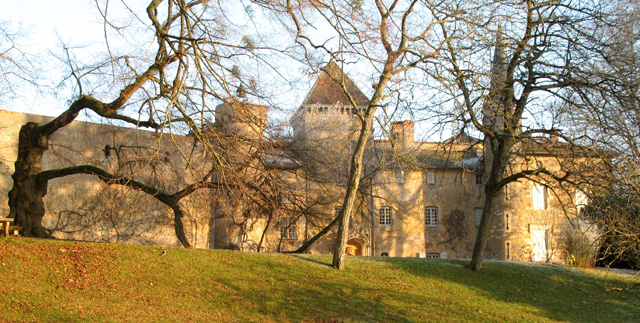 Location: Saint-Point, in the Saône-et-Loire departement of France (Bourgogne Region).
Built: Unknown.
Condition: Restored in 1820.
Ownership / Access: Currently owned by Count de Noblet d'Anglure. Its open to visitors.
Notes: Saint-Point Castle, also known as Château de Lamartine is located in the municipality of Saint-Point in Saône-et-Loire, on the slope of hill, near the church. Its most famous owner was the poet Alphonse de Lamartine. It is the subject of a classification as historical monuments since September 1972 (workroom and living room) 2. This protection is complemented January 26, 1989 (by a ranking of facades and roofs, dining room, large living room) and an inscription (outbuildings) on that date.The construction consists of a central main building, rectangular square between two large pavilions slightly advanced on its western facade. The windows of the facade were provided to the nineteenth century to support balconies of wrought iron railing, installed forward of their lighters. At the same time, a busy gate, topped by a curved pediment and preceded by a staircase, was drilled between the ground floor and first floor of the west facade. The eastern facade is preceded by a large rectangular courtyard surrounded by common and closed by a gate and a carriage entrance without coronation, overlooking the road. The park is separated by a wall of the communal cemetery where the family vault in which lies Alphonse de Lamartine.The castle is privately owned. The visit is permitted.