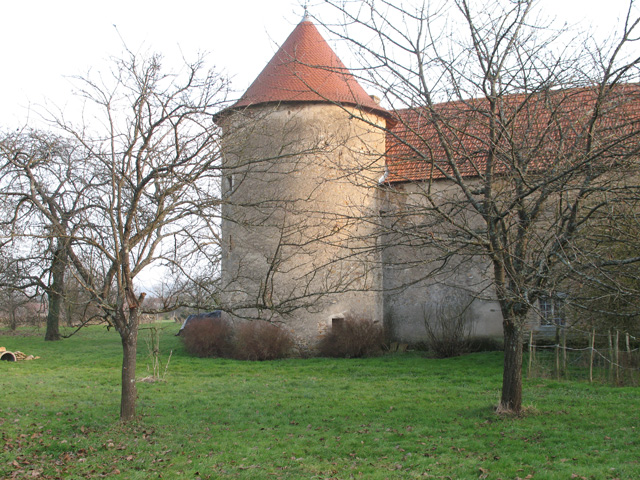 Location: Saint-Maurice-de-Satonnay, in the Saône-et-Loire departement of France (Bourgogne Region).
Built: --.
Condition: --.
Ownership / Access: Private property and not open to the public.
Notes: The castle of Saint-Maurice is located in the municipality of Saint-Maurice-de-Satonnay in Saône-et-Loire, in slope flank.On almost square enclosure, there remain only two sides, made up of old farm buildings arranged in L, on the outside corner which rises a circular tower pierced by an archer-gunboat. A second tower flanks the façade of a small rectangular main building covered by a mansard roof, which was built in the eighteenth century and nineteenth century on the site of the eastern curtain. This tower, which clearly dominates all the buildings is covered with a glazed tile dome returned sewer, crowned by a lantern The monumental gate, built in 1629 by Laurent Chevriers, whose amounts were decorated with twelve shields of arms of his predecessors, disappeared in the late eighteenth century.The castle is privately owned and not open to visitors.