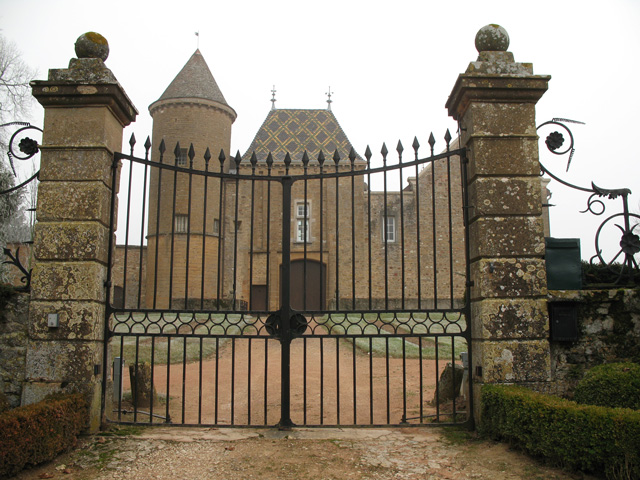 Location: Charnay-lés-Mâcon, in the Saône-et-Loire departement of France (Bourgogne Region).
Built: 14th century.
Condition: Restored in 19th century.
Ownership / Access: Private property and not open to the public.
Notes: The castle of Saint-Léger is located in the municipality of Charnay-les-Macon in Saône-et-Loire, on the east end of a rocky hill and wooded area overlooking the small valley Grosne.The buildings surrounding a rectangular courtyard which is accessed by a porch-tower pierced with a cart door lintel segmental arch accosted a pedestrian door, above which we still see pendulums slots of the drawbridge and gateway which was replaced by a stone fixed bridge. A round tower, made slightly talutée, and two rectangular towers, flanking three angles of this quadrilateral. The main building, which builds on the northern curtain, is served by a spiral staircase and pierced with mullioned windows and braces. Common occupy the southern flank. He found there a fireplace bearing the vintage 1645. An arched gallery built in the nineteenth century connects the eastern pavilions. In the north, outside the enclosure, the cuvages and winemakers of housing were built on the site of the old parish church demolished in 1796.The castle, private property can not be visited.