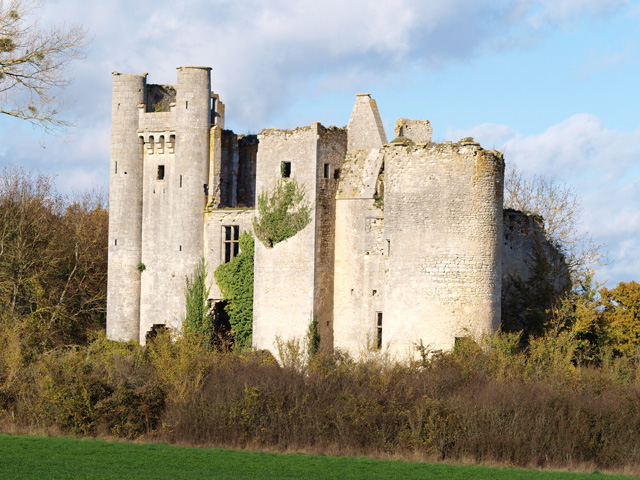 Location: Varennes-lés-Narcy, in the Niévre departement of France (Bourgogne Region).
Built: 14th century.
Condition: Ruins.
Ownership / Access: Privately owned.
ISMH Reference Number: PA00113040
Notes: Château de Passy-les-Tours is located in Varennes-lès-Narcy Nièvre. The Passy-les-Tours castle is the subject of a registration as a historic monument since June 28, 1927. Built on a plane oblong about 50 m square flanked at the corners by four round towers, the castle, built in the late fourteenth century by Jean Chevenon then adviser Charles VI of France, was equipped with a tower 25 meters high overlooking the entrance arch. Its architecture is inspired by the Chateau de Vincennes and its imposing towers give the village its name. During the Hundred Years War, from 1422 it is occupied by the captain Perrinet Gressard who stood up to Joan of Arc during the siege of La Charité-sur-Loire in 1429. Very damaged by religious wars, the castle became in 1782 the property of the Marquis de Vergennes, politician and diplomat, who does no more than restore the will only do its successive owners. Rather, the stones will be used for other constructions.

How To Get To Château de Passy-les-Tours (Map):