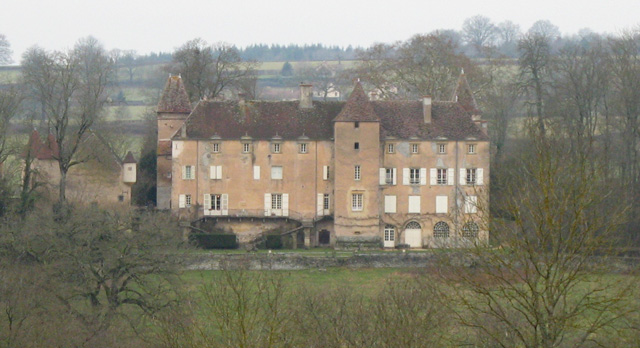 Location: Vaudebarrier, in the Saône-et-Loire departement of France (Bourgogne Region).
Built: 14th century.
Condition: In good condition.
Ownership / Access: Chanay Family. Not open to public.
Notes: Château de Molleron (or Moleron) is located in the municipality of Vaudebarrier in Saône-et-Loire, on a terrace overlooking the Ozolette. The main building is elongated rectangular plan. The central span of the west facade is crowned with a large arched pediment, in which are carved the arms of Chanay and Macheco and pierced a door arched out of work preceded by a porch supported by two pairs of columns fluted Tuscan order. This home is flanked on its facade, a square tower out work on the pan, which marks the end of the sixteenth century building, on its northwest and southwest corners of two square turrets whose one houses a chapel. In one of the rooms, decorated with Renaissance frescoes, was put together a beautiful fireplace of the sixteenth century from the castle of Moulin-Lacour, in Marcilly-la-Gueurce. At right angles to this set, the outbuildings, which were once attached to it by a building element destroys the nineteenth century, consists of a long building whose corners are flanked by large round towers and turrets overlooking lit by tiny framed oculus with tracery. On top of a cart door, a cartouche is decorated with family crests of Chanay and Levasseur Bambecque-Mazinghem. The castle, private property can not be visited.

How To Get To Château de Molleron (Map):