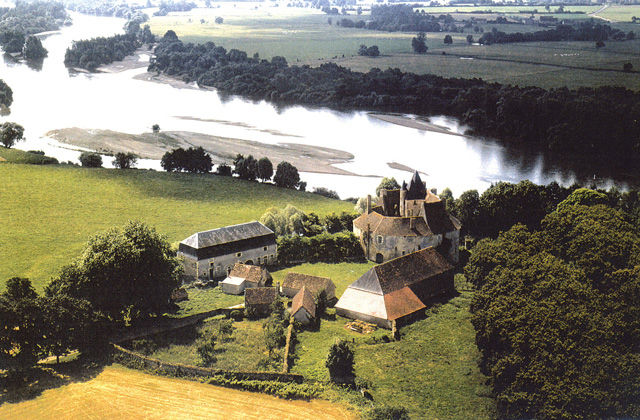 Location: Saincaize-Meauce, in the Nièvre departement of France (Bourgogne Region).
Built: 15th-19th century.
Condition: In good condition.
Ownership / Access: Privately owned.
ISMH Reference Number: PA00112997
Notes: Château de Meauce is a medieval castle situated on the edge of the Allier in the town of Saincaize-Meauce (Nièvre). Its circular and polygonal shape gives it the appearance of a huge tower. The ditches have almost disappeared and the alluvium were removed during the same Allier castle. It has the appearance of a round tower enclosing a courtyard. Primitive fortress, leaving only thick walls of the enclosure walls which in places have more than 3 meters thick and which buildings from various eras were supported. Significant alterations were made in the fifteenth century and the buildings in the courtyard were built largely in the seventeenth century. The most elegant part of the courtyard is a hexagonal tower with sides having at its top a square room whose angles are cantilevered. It is flanked by a turret overlooking a cul-de-lamp moldings, housing a staircase leading to the watches. This staircase is a listed building. The old archers were opened in square windows, some of which are framed and others, pear-shaped moldings, offer braces. These windows were open to the west and south. The door to the tower is topped by a pointed arch adorned with a crest and mantling damaged during the Revolution. One can find traces of a patch over one of Southeast exterior windows. Meauce Castle had its own chapel. The presence of a Gothic window gives us the evidence. It was on the first floor had a wooden altar. House layout of the castle: the ground floor is a large room; the first floor there are three bedrooms with wardrobe and chapel; the second floor, there are also three bedrooms. The attic was used for storage. The castle was the subject of a classification as historical monuments by order of 16 August 1971. The protection covers the facades and roofs, the remains of a fireplace and the staircase of the turret above mentioned.

How To Get To Château de Meauce (Map):