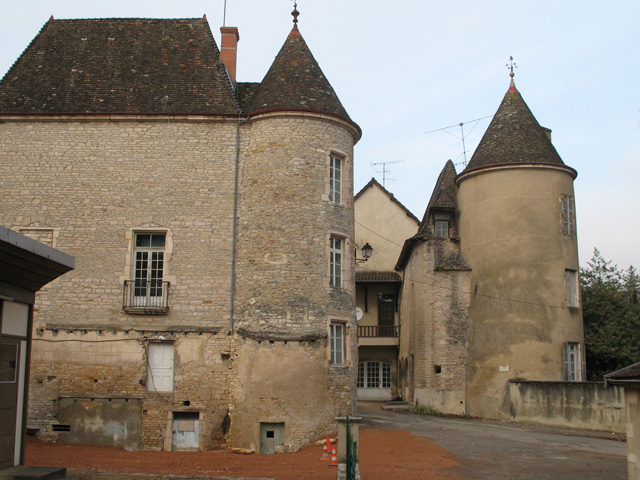 Location: Lugny, in the Saône-et-Loire departement of France (Bourgogne Region).
Built: Unknown.
Condition: In good condition.
Ownership / Access: Privately owned. Now a school.
Notes: Chateau de Lugny is located in the municipality of Lugny in Saône-et-Loire, west of the village at the foot of the mountain of the Castle. In the Middle Ages, the castle of Lugny, flanked by several towers and a dungeon with "very high and very beautiful," was surrounded by ditches filled with water from the source of the Bourbonne - source called "Blue Waters" - which springs at the foot of the mountain of the Castle. However, the imposing castle of the lords of Lugny set fire to the French Revolution, it remains today that two round towers three stories traditionally dated to the fourteenth century and part of the common buildings corresponding essentially to those of the old farmyard of stately and forming a quadrilateral. At each of the two input towers is attached a narrow building. Thereof, located perpendicularly to each other are covered by high hipped roofs with flat tiles. The roof of the building attached to the entrance tower Northeast is pierced in the rump of a window overlooking a circular turret in damping out the angle between the building and the tower. Past the two input towers - which once flanked a door with drawbridge now lost - is found on the left three arched openings partially walled recalling the "gatehouse", the former caretaker of the castle. On the right are seen two elegant windows and arches with moldings and the entrance of the old stables of the castle - traditionally dated to the sixteenth century - which gives access a door with a basket-handle arch. The building in which lived the lords of Lugny once stood on the median between the current position of the Church and the mountain of the Castle. Burned July 27, 1789, it has almost entirely disappeared and only remain of this construction the base of a circular tower, and a few meters, a small part of the ancient wall. The castle is privately owned and not open to visitors.

How To Get To Château de Lugny (Map):