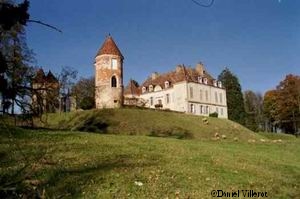 Location: Loisy, in the Saône-et-Loire departement of France (Bourgogne Region).
Built: 1150.
Condition: Reconstructed in 1633.
Ownership / Access: Private property. Not open to public.
ISMH Reference Number: PA71000041
Notes: The Chateau de Loisy is located in the municipality of Loisy in Saône-et-Loire, on the eastern edge of the village, on a hill overlooking the valley of the Seille.Preceded west of a first gap and a semicircular portal in upper staircase between two round towers, the castle is built on the north side of a rectangular terrace flanked on its northwest corner and southwest of circular towers, formerly connected by thick curtains which was interrupted substituted a low wall in the center of the facade, with a wrought iron gate. The main building, of rectangular plan, is covered with a hip roof. At both ends of the south facade, are backed by two square towers capped with pavilion roofs. At the center of this facade, opens a door lintel in segmental arch surmounted, overlooking a balcony to rest body wrought iron patio doors inscribed in a coaching boss whose lintel supports a entablature -Dessus which is a rectangular tympanum engraved with a Latin motto, boss between two legs. The whole is crowned at the height of floor, a small arched pediment in which are carved the arms of Chartraire and Bouhier. The north façade is preceded by a large horseshoe staircase. The castle is privately owned and not open to visitors. It is the subject of a registration as a historic monument since May 4, 2007.