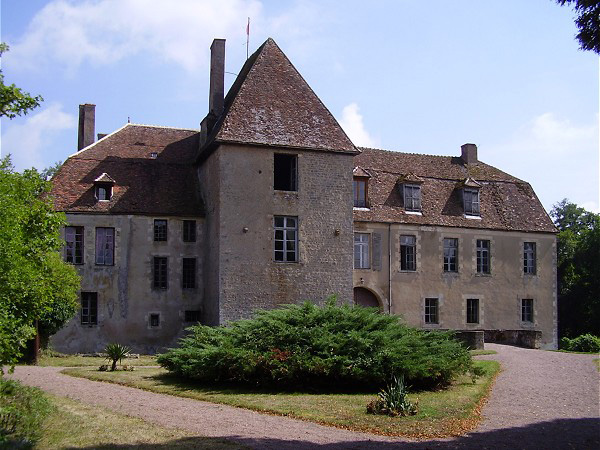 Location: Cervon, in the Niévre departement of France (Bourgogne Region).
Built: 13th century.
Condition: Ruined.
Ownership / Access: Privately owned.
ISMH Reference Number: PA00112505
Notes: Château de Lantilly is an eighteenth century house, built in finage Cervon in the department of Nièvre. The first building in this place is a Gallo-Roman villa named: Villae Lentuli, name of its owner, Lentulus, resulting from gentile Cornelie. Originally this ancient fortified house had 6 laps with a double enclosure ditches fed by the waters of the river, with drawbridge, surrounding the low and high court and the keep. This castle was occupied by the Anglo-Navarre troops in 1358 and 1359, destroyed during the religious wars and rebuilt in the seventeenth century and the nineteenth century. The moat, Boutron and dovecote (cad.G 654 653 651) are the subject of a registration as a historic monument by decree of November 6 198 511. Inside, the room decorated in the nineteenth century on the ground floor, the stairs, the room with the ceiling beams and cob upstairs, the room with the big fireplace upstairs and externally , facades, roofs and outbuildings, garden and water structures, including water projects (cad.F 43; G 640, 642-651, 653, 656, 661, 663, 664, 693, 785, 788, 790-796, 825, 826; ZV 11.35) are the subject of a registration as a historic monument by decree of August 18, 2005.

How To Get To Château de Lantilly (Map):