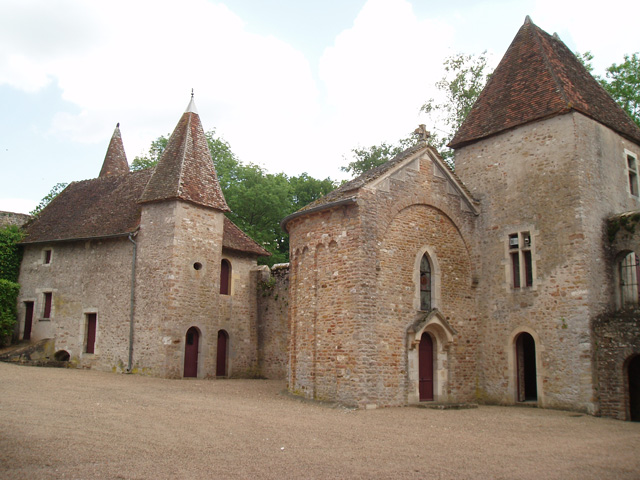 Location: La Chapelle-de-Bragny, in the Saône-et-Loire departement of France (Bourgogne Region).
Built: 12th century.
Condition: In good condition.
Ownership / Access: Private property. Not open to public.
ISMH Reference Number: PA00113190
Notes: Château de La Chapelle-de-Bragny is located in the municipality of La Chapelle-de-Bragny in Saône-et-Loire, in the Glandon valley. The castle consists of an irregular quadrilateral, flanked by a large round tower, two circular towers and a square tower. With part of the wall and the apse of the chapel, these are the oldest parts of the whole. A stone bridge, spanning a dry ditch, leading to a gatehouse built between a house, probably dating from the late eighteenth century and a pavilion resulting from recent changes. Common occupy the north side of the court. The castle is privately owned, but they visit the first fifteen days of July and throughout the month of September. The remains of the ancient walls, facades and roofs of the square tower, two round towers and the corner building, the walls of the nave of the chapel encompassed in the compound were listed historic monument by decree of February 25, 1974, while the apse of the chapel has been classified by the same decree.