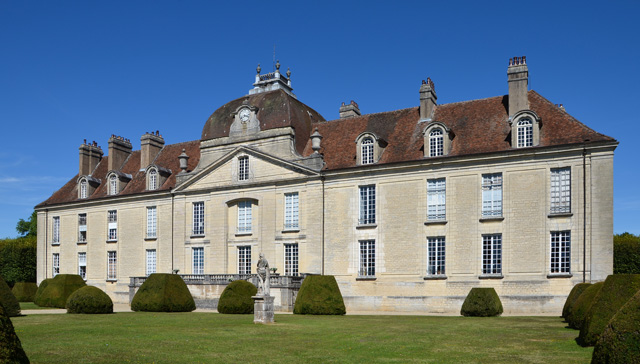 Location: Fontaine-Française, in the Côte-d'Or departement of France (Bourgogne Region).
Built: 1754.
Condition: In good condition.
Ownership / Access: Privately owned.
ISMH Reference Number: PA00112465
Notes: Château de Fontaine-Française is a castle in the center of Fontaine-French (Côte d'Or), in Burgundy. The castle with its gardens composed of 372 lime trees pruned in porch and topiary yew and boxwood been a classification as historical monuments since November 12, 1945 and October 6, 1993 registered for the garden and 'orangery. The castle and the so-called common-Petit Château and the park were listed as historical monuments 12 November 1945. Then October 6, 1993 the garden and its central basin, its surrounding wall and its entrance gates, and the orangery covered in ice lavas were enrolled historique monuments. Protection includes the castle itself, the so-called common "Petit Château", orangery, park and garden, including entry gates, the boundary wall covered in lava and ice, and the central Basin (cadastral references: our section AA 38-40, 94).

How To Get To Château de Fontaine-Française (Map):