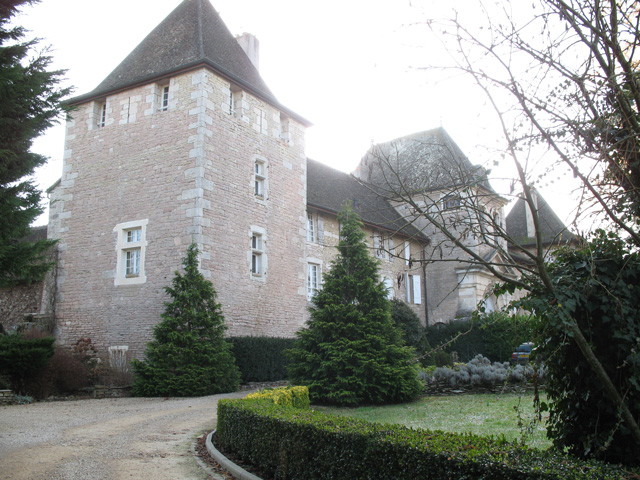 Location: Dracy-le-Fort, in the Saône-et-Loire departement of France (Bourgogne Region).
Built: 12th century.
Condition: Ruined.
Ownership / Access: Privately owned. Not open to public.
Notes: Château de Dracy-le-Fort is located in the municipality of Dracy-le-Fort in Saône-et-Loire, bordering the Orbise, 100 meters from the church. The construction comprises a large building flanked at its ends with two square towers. In the center of the west facade, stands a rectangular tower-porch strong projection and the same height as the corner towers. This set was probably built in the sixteenth century on earlier foundations. In the eighteenth century, in front of the gatehouse, was plated a wide gate topped by a pediment. A wide archway gives access to a courtyard that has almost completely preserved its original appearance: it is limited by two parallel buildings located at right angles from the corner towers. One contains basement room with five bays of ribbed vaults resting on four round pillars and was to be the cellar. The other extends to a corner tower in ruins, still likely of the old dungeon. In front of the facade, a large avenue of lime trees give the castle a stately pace. The castle is privately owned and not open to visitors.