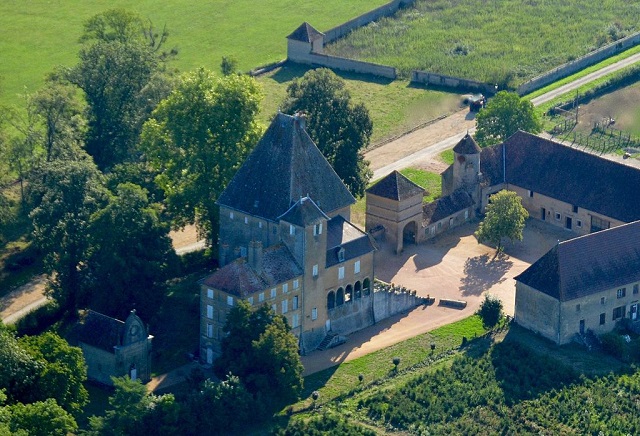 Location: Volesvres, in the Saône-et-Loire departement of France (Bourgogne Region).
Built: 12th century.
Condition: In good condition.
Ownership / Access: Private property.
Notes: The castle of Cypierre is located on the commune of Volesvres in Saone-et-Loire, on a hill.The construction consists of four parts: a massed plan dungeon, largely of the twelfth century, erected on a strong clod; A fourteenth-century corner turret, of square plan and comprising a spiral staircase; A body built in the eighteenth century in the corner formed by the turret and the keep; Another body of building, of plan barlong, dated 1823, accoté, part to the donjon, part to the turret and which was damaged in 1944 by the maquisards. A terrace and a staircase with two straight flights with rest serve the east facade of the first building. To the west, a chapel, anterior to 1818, was reassembled in 1901. Outbuildings rise to the east around a courtyard opening to the north by a portal with door carter supporting a dovecote dating from 1831. A turret supporting two bretches is enclosed in the buildings of exploitation. With the dungeon, it is the only vestige of the defense system of the castle. The castle is a private property and can not be visited. It has been registered for historic monuments since 23 December 1985.

How To Get To Château de Cypierre (Map):