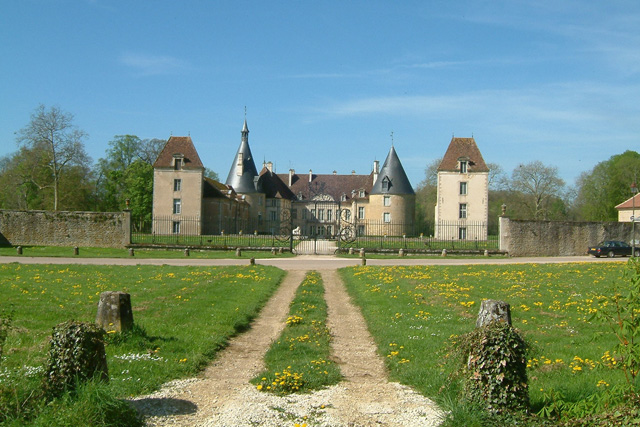 Location: Commarin, in the Côte-d'Or departement of France (Bourgogne Region).
Built: 14th century.
Condition: In good condition.
Ownership / Access: Privately owned.
Opening Times: Check their website for more info.
Price of Admission: Check their website for more info.
ISMH Reference Number: PA00112222
Notes: Château de Commarin is near Châteauneuf, Côte-d'Or, in the center of Burgundy, 40 km west of Dijon. Its architecture, its park and its richly furnished interior retrace its occupation from the beginning by the same family. The castle is the subject of a classification as historical monuments since 21 September 1949. Château de Commarin is a regular building and relatively symmetrical classical inspiration. The body of the central building is richly decorated pediment flanked by two wings (wing Louis XIII in the east wing and Louis XIV in the West) each terminated by a large round tower of the fourteenth century. A stable prolongs the wing Louis XIII. The set is surrounded by wide moats extended two ponds and surrounded by an English park of five hectares with beautiful common and broad prospects. Besides its architectural qualities, Château de Commarin is remarkable for furniture and decorations wealth of centuries seventeenth and eighteenth, reflecting the different generations who inhabited the place. A unique collection of family heraldic tapestries and alchemical sixteenth century is also presented.

How To Get To Château de Commarin (Map):