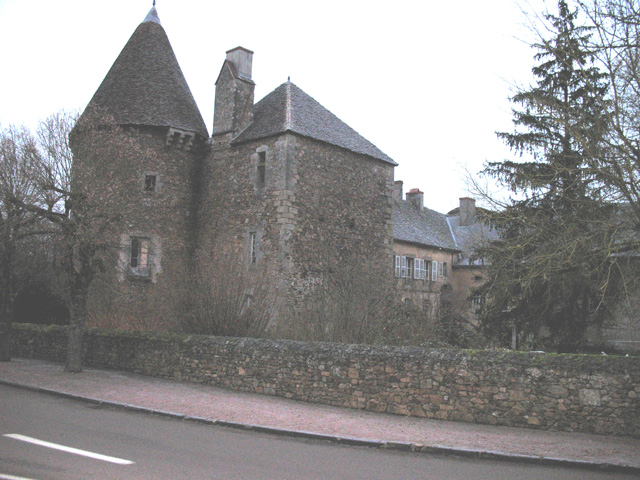 Location: Chissey-en-Morvan, in the Saône-et-Loire departement of France (Bourgogne Region).
Built: 13th century.
Condition: Ruined.
Ownership / Access: Private Property. Not open to public except Heritage Days in September.
ISMH Reference Number: PA71000007
Notes: Château de Chissey-en-Morvan is located in the municipality of Chissey-en-Morvan in Saône-et-Loire, on the edge of Ternin, a little away from the village. It is the subject of a registration as a historic monument since June 12, 1997. Located at the entrance of the village, coming from Autun, he had only one three-storey tower in the twelfth century. Today it is truncated and the castle was incorporated in the late thirteenth century, at the northeast corner. The main building is located deep in a courtyard, he understood: a vaulted cellar, mezzanine and first floor with a gallery overlooking the courtyard. In the South, vis-a-vis, a curtain was divided in two by a drawbridge, preceded by a fixed bridge, flanked by two slits for his Defense2. The main buildings common to the right upon entering the courtyard, was equipped with a large kitchen, a chapel, barn and stables. There were four corner towers, each with two slits. The castle was surrounded by a wide and deep moat, followed by a slope. This defensive architecture, bristling with battlements, made by difficult access. Today the South West tower no longer exists. Once extended to the west by the keep and a tower, all that remains of the original fort castle with three round towers, a massive square tower and two buildings built at right angles. Ditches, fed as the mill by the river, have been met. The oldest building is the northeast tower. The square tower was remodeled in the eighteenth century. In the chapel, Christian Montmoyen and Chissey made in 1668 to an income of 66 books, a foundation of three Masses per week, namely on Monday, Requiem; Thursday, the Holy Sacrament and Saturday of Holy Virgin. A desk, in the side wall, allowed the Lord to hear mass of the corner of its chimney, we said Abbe Baudiau. The peasants of addiction were required to be there and watch-guard, in times of disorder. The castle, private property can be visited from July to September. The castle can also be visited during the Heritage Days in September.