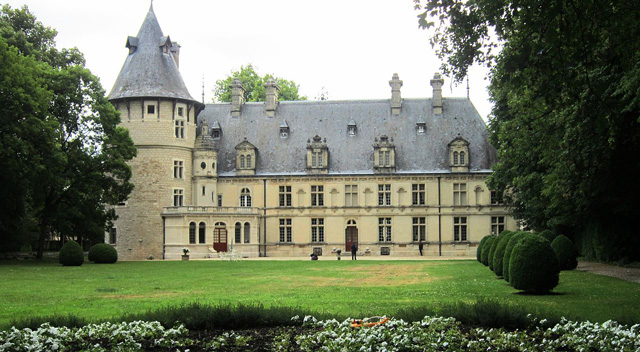 Location: Montigny-sur-Aube, in the Côte-d'Or departement of France (Bourgogne Region).
Built: 16th century.
Condition: In good condition.
Ownership / Access: Privately owned.
ISMH Reference Number: PA00112557
Notes: Château de Beauregard is a castle of the sixteenth century, located in Montigny-sur-Aube, in the French department of Côte-d'Or.A fortified house is on the site of the present castle from the twelfth century. It is reinforced in the thirteenth century and then dismantled in the wake of religious wars to give way to a castle built of approval between 1550 and 1553. It acquired May 22, 1724 by René Charles de Maupeou, future Vice Chancellor and custody seals of France, and inherited by his son Louis de Maupeou (1716-1800), Lieutenant General, 3 selling the March 26, 1784 to Count Savoisy (Bro, notary in Paris). This is three-quarters destroyed by fire in 1794. In 1817, major demolition work necessary and in 1903, the moat is restored, outbuildings north of the refurbished castle and a heated orangery is built . In 1918, Harry Truman, later President of the United States, spending a few months. During World War II, the castle was occupied by the Germans.