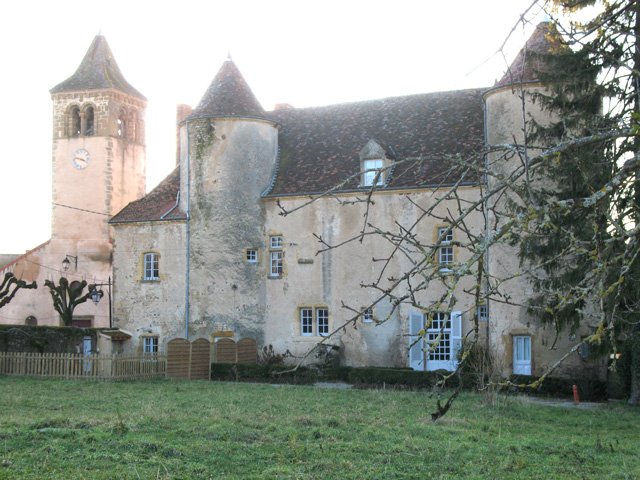 Location: Oyé, in the Saône-et-Loire departement of France (Bourgogne Region).
Built: 11th century.
Condition: Restored.
Ownership / Access: Private property. Not open to public.
Notes: Château d'Oyé is an ancient castle, center of the Lordship and Barony of Oye, which stands on the town of Oye in the department of Saône-et-Loire, in the Bourgogne region. An excerpt from the 1636 census indicates in its inventory "the old circuit of said castle wont to be walled in which circuit sits the parish church with the cemetery said Oye", which means, inter alia, that the grounds of castle encircled the church and the village. This vast fortress, all that remains of a house fifteenth and sixteenth centuries, rectangular plan under a hip roof. It is flanked by two round towers topped with conical roofs and an octagonal staircase tower completed terraced courtyard outside work. The main building of the windows are topped by lintels adorned with braces, very restored in the nineteenth century; those of the stair tower, rectangular, have frames and mullions and molded braces. The tower of this gateway is crowned with a gable brace in between two pinnacles, in the eardrum which are carved coat of arms with three bands that can be either those of Luzy, those of Breschard.