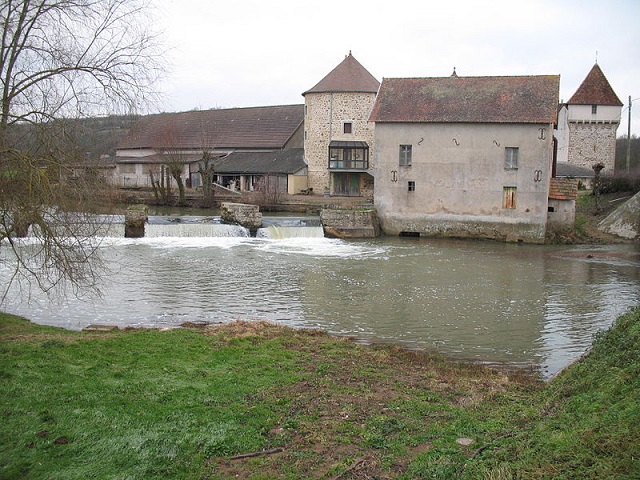 Location: Igornay, in the Saône-et-Loire departement of France (Bourgogne Region).
Built: --.
Condition: In good condition.
Ownership / Access: Private property.
Notes: The castle of Igornay is located in the commune of Igornay in Saone-et-Loire, on the banks of the Arroux. It controls the passage of the river, the Arroux.Of polygonal plan, the castle would have included seven towers. There are only three of them with a main house and curtains. The most massive tower rises towards the south-west; It was disfigured by a fire and would be before the fifteenth century. The main building, situated to the east, dates from the fifteenth century as the square tower planted at an angle that flanks it to the south-east and whose machicolations carry a corbelled staircase built of brick; This tower recalls that of Epinac. Access to the castle was made towards the east by a door of which large blocks of stone paired mark the location. Towards the north, the curtain wall against which the newer buildings came to rest. It is reinforced to the north by a round tower which has retained archers, stone chimneys, cushions and latrines housed in the corner of the wall; It is accessed by a rectangular door framed by an embrace and surmounted by a shield bearing the three wavy fasces of the Sercy. From another tower there remain an arch and the remains of a door. The ditches which surrounded the castle are visible especially towards the north, where we see the metalling which reinforced the outer slope. Towards the south, the walls were cut down to leave the yard wide open. The castle is a private property and can not be visited.Twelfth century: mention of a seigneurial family; The lords Alvis d'Igornay, Guy des Barres, Guyot de Thianges. In the thirteenth century, a Hugh of Igornay appears at the obituary of the abbey of Saint-Martin d'Autun: "VIII idus.apr. Hugues d'Igornay ". Middle of the fifteenth century: Guillaume de Sercy, bailli of Chalon, obtained the transfer of the parish church out of the courtyard of the castle and made do important works. End of the fifteenth century: the successor of the preceding one is Guillaume de Villers-la-Faye. 1541: the descendants of the latter sell the castle to Gaspard de Saulx-Tavannes; Igornay then becomes a dependency of the barony of Sully, whose destiny he follows. Current period: the property, shared among several families, is occupied by a farm and dwellings.