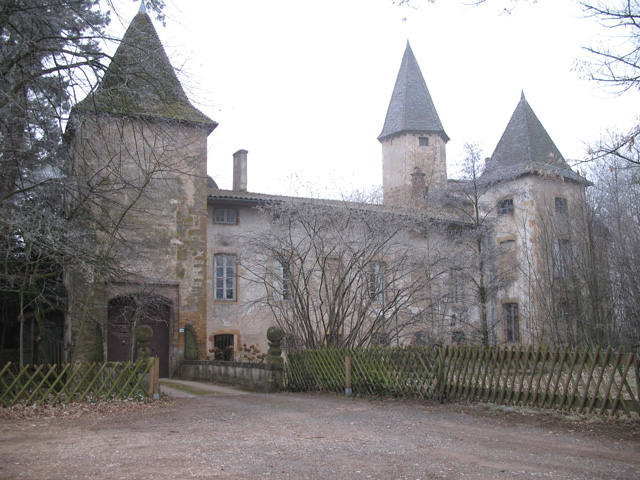 Location: Crêches-sur-Saône, in the Saône-et-Loire departement of France (Bourgogne Region).
Built: 14th century.
Condition: Restored.
Ownership / Access: Privately owned. Not open to public.
Notes: Château d'Estours, is an ancient fortified house of the nineteenth century that stands in the town of Crêches-sur-Saône in the department of Saône-et-Loire in Burgundy. The castle is the subject of a partial inscription as historical monuments by order of 5 December 19841. Only registered facades and roofs of the north and west wings; the tower in the corner of the fifteenth century with its spiral staircase; the two staircases of the eighteenth century the west wing; the vaulted oratory, the fireplace in the dining room and the large room on the ground floor of the west wing; the vaulted oratory, the room number 3 with its fireplace and decor, fireplaces rooms numbers 1, 2, 4 and 5 on the first floor of the west wing; moat and access bridge. The castle occupies an irregular quadrilateral surrounded by a moat. Only remain the north and west wings. The north wing is flanked at both ends of its facade overlooking the moat which separates the false bray, square towers higher work half off half a floor. The cart door, preceded by a stone bridge, opens under the north tower. The passage to which it gives access opening into the courtyard next to a hexagonal tower adjoining the south façade of the house. The west wing consists of two buildings located in the extension of one another: a large rectangular building with a square floor, probably built in the fifteenth century on older foundations and altered over the following centuries, and whose one of the outside corners is defended by a recently restored circular watchtower; a narrower building, whose ground floor houses common. At the southern end of this wing stands a large round tower that was perhaps the primitive dungeon whose walls are 1.40 meters at the base. In the angle formed by the two wings is a high tower hexagonal staircase. The castle, private property can not be visited.

How To Get To Château d'Estours (Map):