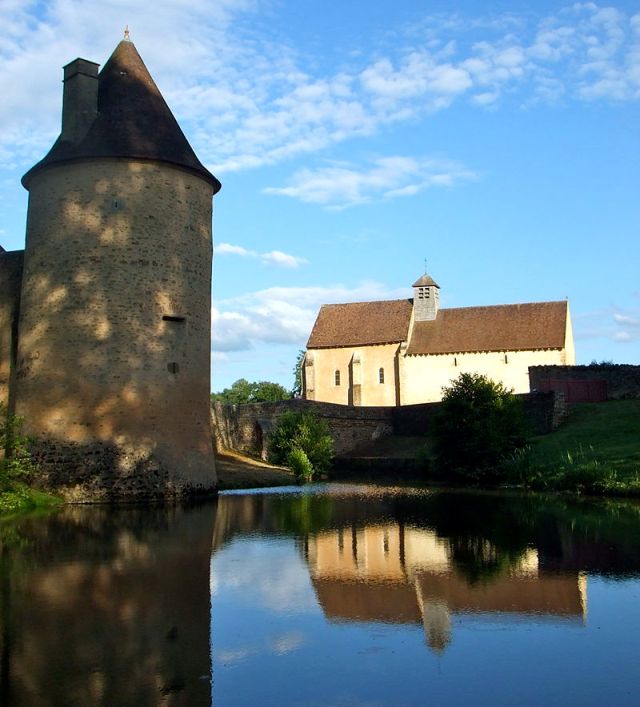 Location: Limanton, in the Côte-d'Or departement of France (Bourgogne Region).
Built: 12th-18th century.
Condition: In good condition.
Ownership / Access: Privately owned.
ISMH Reference Number: PA00112906
Notes: Château d'Anizy is a sixteenth century mansion, built on the foundations of a fortress from the twelfth century, located in the municipality of Limanton in the department of Nièvre.The site was inhabited since Gallo-Roman to this day without interruption. Archaeological surveys in 1991 attest. It has regained a level of burials of the eighth century and the ninth century, and the floor of a building of the thirteenth century. The foundations of a building between the ditches and the square, dating from the Gallo-Roman period and the Middle Ages were also highlighted. The present castle was built in the early sixteenth century by Charles Hector and the Frasnay ​​on the foundations of a strong house. Originally the stronghold protected the fording of Aron2, where it pulled in revenues from tolls. This fief, which was a barony, moved the Dukes of Nevers and lord of Châtillon-en-Bazois. In the fourteenth century it was owned by the House of Anisy, then moved to the Houses of La Tournelle and Chandou and 1450, that of Frasnay. It was Charles Frasnay, which in 1571 reuse the stones of the old tower to make rebuilding a new "round the square outside and after the inside." In 1621, Hector Frasnay ​​will make additions, the increasing of a pavilion featuring fireplaces. In 1666, he met in the land of Vandenesse by Louis du Bois de Fiennes. This lordship was seized on Marie Edmee Frasnay ​​Joachim wife of Villers-la-Faye, Lord of Vançay and awarded in 1673, to Louis du Bois de Fiennes, Marquis de Givry and Vandenesse, lieutenant general of the king's armies. Facades and roofs; wooden staircase of the entrance tower; fireplace in the dining room on the ground floor are the subject of a classification as historical monuments since July 7, 1980.

How To Get To Château d'Anizy (Map):