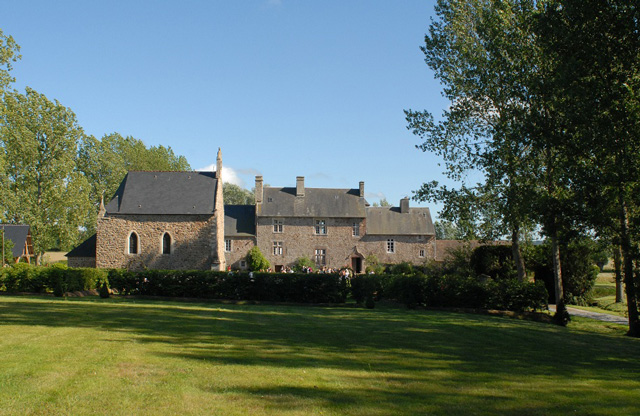 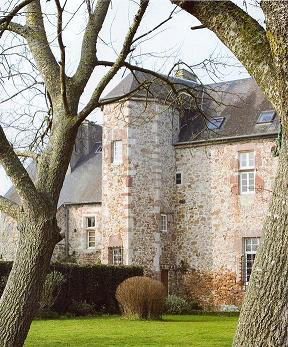 Location: Dézert, in the Manche departement of France (Basse-Normandie Region).
Built: 15th century.
Condition: Burnt in 1346.
Ownership / Access: This is a private property.
Notes: The mansion of Saint-Ortaire or mansion Mare Dézert located Dézert (Cotentin, in the department of Manche in Normandy) is a stately home dating from the late Middle Ages and early Renaissance. The property is sold in 1614 to Michael Martin, rich draper of St. Lo, whose heirs sell the property in 1654 (for the buy back 3 years later); we read on the deed description of the property: "... the mansion, consisting Manable home presoir, barn and ESTABLES, Trye Fuye or pigeons, Chapel droict with gardens, grass and fruit, the as he stands ... "There follows a long list of pieces of land. The manor became property, among others, Armand Jerome Bignon, librarian of Louis XV and Jerome Joseph-Marie Grimaldi Monaco9 The last recent provision (Saint-Lô archives) of the Napoleonic plan for 1823 confirms the presence of a double enclosure protecting the assembly. Namely: a first protective wall encircling the north side of the manor and the chapel, supported by a tower at its Northwest (now defunct). This court was accessible by a double entrance gate to the east of the chapel. A second chamber was formed in the north by high banks and south by an ever-existing gap, "Lime St Ortaire". Note the disappearance of another round (of square) adjoining on the north side of the manor. The quality of all its historical interest and allowed his registration as a historical monument June 25, 2004 (the mansion as a whole as well as protection of the interior) 10. The restoration of the mansion and chapel (private property), starting in 2002, was honored by the French Vieilles Maisons, the General Council of La Mancha, the Langlois Foundation and the Heritage Foundation.