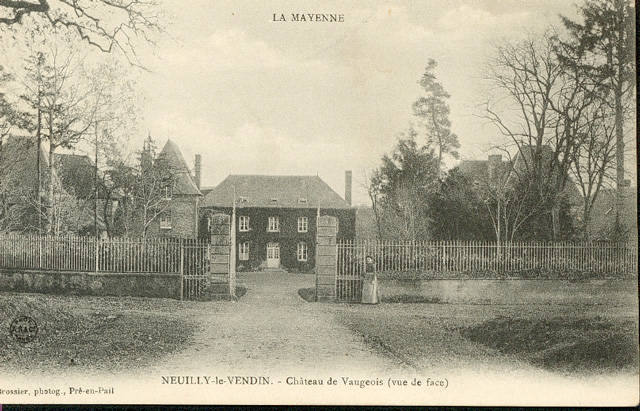 Location: Saint-Ouen-le-Brisoult, in the Orne departement of France (Basse-Normandie Region).
Built: 15th century.
Condition: --
Ownership / Access: --
Notes: Castle Vaugeois is located in Saint-Ouen-le-Brisoult (Orne) and extends over the neighboring towns of Neuilly-le-Vendin and Madre (Mayenne). It is crossed by the river Mayenne. Construction of the castle is earlier than 1510. Significant pavilions flanking the courtyard were then built at the end of the sixteenth century and significant renovations have taken place at the beginning of the eighteenth, using particular career slate property. The surrounding walls were shot at the time. In the nineteenth century, the house was destroyed and rebuilt in stages, the last few intervening before 1900 with the erection of a tower of bricks and large stones in the taste of the time. At the time of the Revolution, the castle extended over two parallel courses: the courtyard was dominated by the house itself (including the castle of Sainte-Marie-la-Robert neighbor can give an idea), directed ESE- ONO. Two long framed the buildings, each ending in a pavilion Henri IV, one of which was the separation from the farmyard. The south building included a chapel and the north building, in communication with the farmyard, stables and barns. The backyard was bordered to the north of a huge barn building used as tithe, parallel to that forming separation from the main courtyard. The farmer's house (destroyed in the twentieth century), the manure pit, the well cap and stone troughs occupied the courtyard. A now defunct pigeon stood to the west of the castle.

How To Get To Château de Vaugeois (Map):