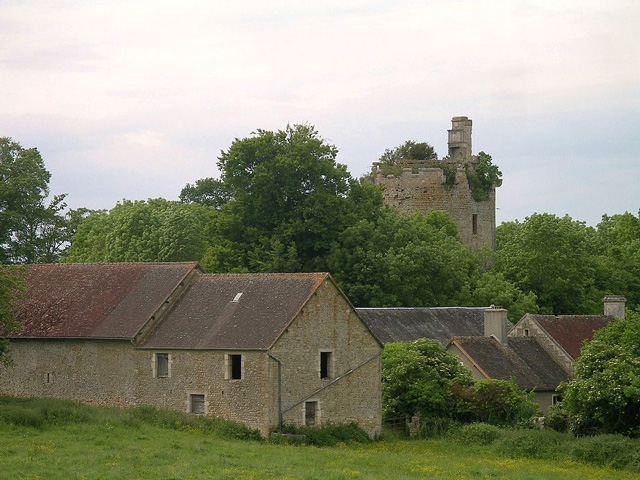 Location: Tournebu, in the Calvados departement of France (Basse-Normandie Region).
Built: Early 13th century.
Condition: Partially Ruined.
Ownership / Access: Privately owned.
ISMH Reference Number: PA00111764
Notes: Château de Tournebu is an ancient castle from the early thirteenth century, the remains of which stand in the town of Tournebu in the Calvados department. The castle ruins are the subject of a registration as a historic monument by decree of 21 June 1927. The tower is the last vestige of the castle that was destroyed after the Revolution. Built in the thirteenth century, it was the sixteenth century topped with a roof. It is built directly on an earlier motte. In the early seventeenth century, the castle was transformed into a modern fortress with the addition of four bastions in a star-shaped plan. Underground are created to connect the bastions to the tower. The cellar dug under the tower and ditches date from this time. This same cave that has destabilized the ground and weakened the building, following the collapse of the stairs. At a height of 21 meters and a diameter of 12 meters, if it reveals a unique construction method in Normandy, he preserved now only the shell, the distribution of floors, the well and latrines and beautiful Louis XIII-style fireplaces. The interior dating him essentially the fifteenth and seventeenth centuries, when its redesign. It will be partially destroyed after the Revolution to serve as a career to its owner. It is of quadrangular shape inside and outside circular. The unique construction method known as the tower is visible on the front where seven or eight jobbers left marks: signs have indeed been carved by stonemasons before installation, as the signatures of their work in the form of simple geometric figures (crosses, lines, triangle) or letters of the alphabet. The dungeon is now privately owned and not open to visitors.