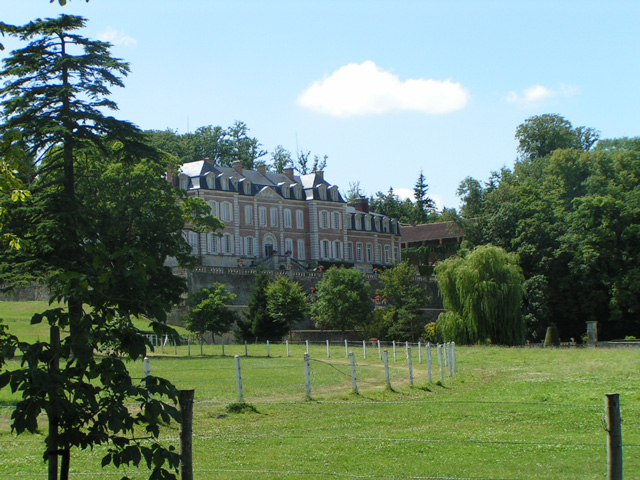 Location: Saint-Christophe-le-Jajolet, in the Orne departement of France (Basse-Normandie Region).
Built: 18th century.
Condition: In good condition.
Ownership / Access: Privately owned.
ISMH Reference Number: PA00110913
Notes: Château de Sassy is located in the municipality of Saint-Christophe-le-Jajolet (Orne). It is the subject of a registration as a historic monument since May 11, 1932. From the Castle of Sassy from the seventeenth century there remains only the entrance pavilions. In the eighteenth century the castle was rebuilt and the chapel was built towards the end of the century. The estate was bought in 1850 by Chancellor Pasquier Without posterity, Sassy he transmitted to his nephew and adopted son, Gaston, Duke of Audiffret-Pasquier, whose direct descendants still live there. Britain's Queen Elizabeth II in 1967 stayed at the castle. The castle has a geographic feature: the end of its west wing is crossed by the Greenwich meridian. The beautiful French garden beds made of embroidery was laid in 1920. The terraces with their stairways, the French garden and the orangery were classified historic monument November 6, 1986. In the park, the farm of Hatrie, known farm of Mesnil, has a pigeon that has been registered as a historical monument January 27, 2006.

How To Get To Château de Sassy (Map):