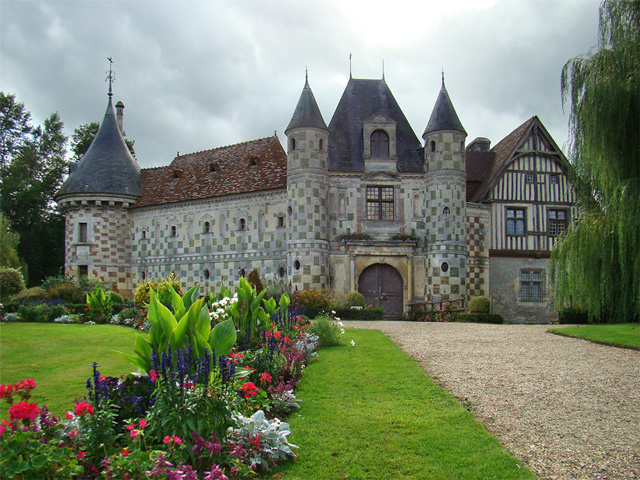 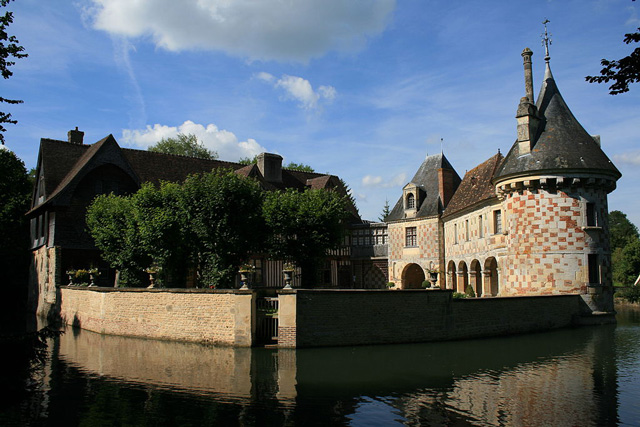 Location: Saint-Germain-de-Livet, in the Calvados departement of France (Basse-Normandie Region).
Built: 15th century.
Condition: In good condition.
Ownership / Access: It became the property of the City of Lisieux in 1958.
ISMH Reference Number: PA00111671
Notes: Château de Saint-Germain-de-Livet is located in the municipality of Saint-Germain-de-Livet in the French department of Calvados. Made up of elements of fifteenth and sixteenth centuries, it became property of the city of Lisieux, a distance of about 7 km in 1957. The current castle dates from the fifteenth century and early sixteenth century3; it was built on the site of a medieval castle, the Robert initiative Tournebu, Lord of Livet, which reconstruct the façade checkered bricks and stones. The castle was owned by the family Tournebu until the death of Marie-Pierre Tournebu (dead last of his branch in 1810). Gift, the castle passed to the Eddy family who kept it until 1879. The castle, acquired in 1957 by the city of Lisieux, became a museum labeled Museum of France which has the furniture and collections of works art family of the legatee of the estate, Julien Pillaut, and, among others, paintings by her grandfather, the painter Léon Riesener (1808-1878), himself a grand-son of the cabinetmaker Jean-Henri Riesener and cousin of Eugene Delacroix. The castle, the museum of art and history of Lisieux and the Plastic Arts School are the three cultural institutions included in the "Pôle museum" of the community of common Lisieux - Auge - Normandy. y.

How To Get To Château de Saint-Germain-de-Livet (Map):