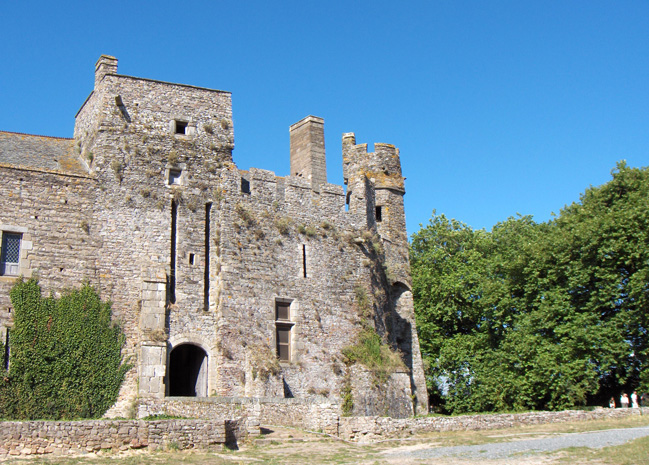 Location: Pirou, in the Calvados departement of France (Basse-Normandie Region).
Built: 12th century.
Condition: Restored.
Ownership / Access: --
Notes: Château de Pirou is a former castle, founded in the twelfth century and profoundly altered in the seventeenth century, the remains of which stand in the town of Pirou, Cotentin, in the department of Manche Basse-Normandie region. It was restored between 1968 and 1994 under the direction of Father Marcel Lelégard. The castle is the subject of a registration under the Historic Monuments by order of 4 July 1968. The castle was the site of a famous Norman legend, probably the oldest of the Cotentin. Besieged by the Normans, the lord of Pirou and his family metamorphosed geese, with a grimoire to escape the attackers. But when, a few days later, the geese returned to the castle to read backwards the magic formula and resume human form, the grimoire had burned the castle burned by the Normans. The story and explain the annual migration of wild geese in March in the Cotentin. In 2006, Magène Hagdik associations and created a musical from this legend. The castle of Pirou site is too small to accommodate a musical, it was presented at Castle Flamanville.

How To Get To Château de Pirou (Map):