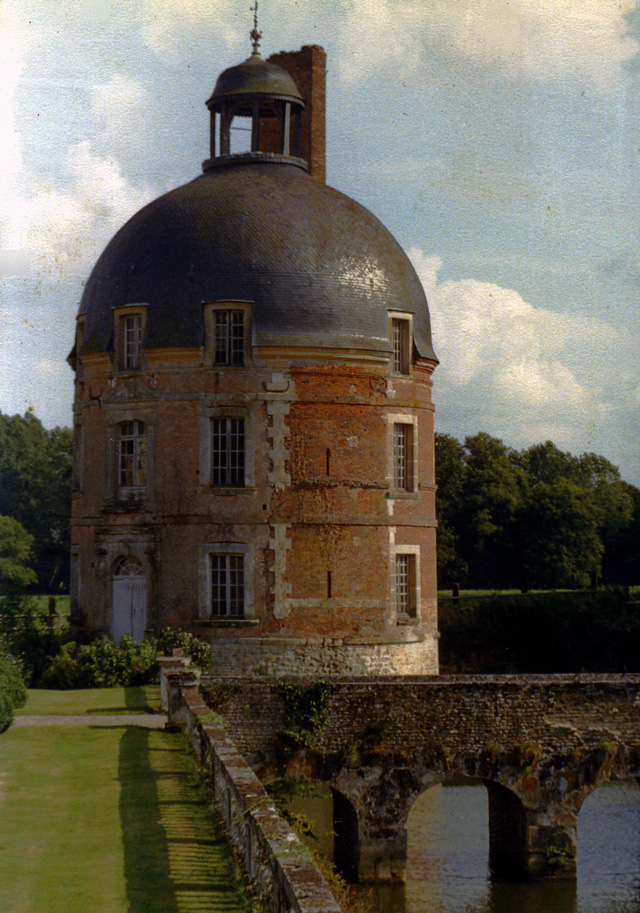 Location: Médavy, in the Orne departement of France (Basse-Normandie Region).
Built: 15th century.
Condition: Partly Ruined.
Ownership / Access: Privately owned.
Opening Times: Open to visitors every summer afternoons.
Price of Admission: Check their website for more info.
ISMH Reference Number: PA00110850
Notes: Château de Médavy, located midway on the road between Argentan Sees, in the municipality of Médavy in the Orne department, is a beautiful house from the eighteenth century classical architecture inspired Mansart, built on foundations of an older fortress as evidenced by a moat and two imposing towers. The current main building was built between 1705 and 1724 by Jacques Rouxel Médavy-Leonor, Marshal of France, and the set was embellished between 1754 and 1789 by Pierre de Thiroux monregard, farmer-general of posts and Relay France. The construction of the present castle was held from 1704 to 1725. Only the moat and the towers of St. Peter and St. John the Baptist dating from the early seventeenth century testify earlier constructions. Moat, their three decks and two towers were classified historic monument July 7, 1989, other buildings were registered, all public and dovecote July 7, 1989 and non-classified parts of the castle from 22 October 1926. The castle garden was partially listed building (the floor of the gardens). He is admitted to pre-inventory of remarkable gardens and dated century.4 eighteenth. The remaining lime alleys and terraces with balustrades were also classified. The castle is open to visitors every summer afternoons. The inner journey to discover an elegant staircase, decorated salons of the eighteenth century French furniture and portraits recalling the previous owners, the Countess of Thiroux monregard by Louis-Michel van Loo. Finally two rooms well equipped cards home to Spanish coffers, atlases and globes. Outside, two superb walkways of lime trees offer a pleasant walk along the River Orne. Tower St. John the Baptist chapel and transformed into the loft exposing works of African art are freely visit.

How To Get To Château de Médavy (Map):