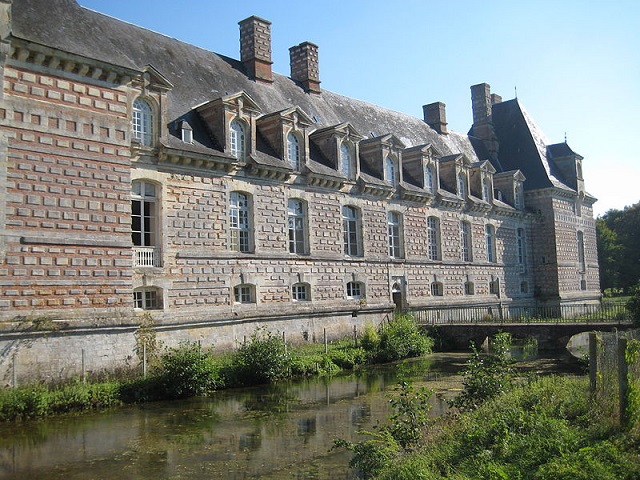 Location: Fervaques, in the Calvados departement of France (Aquitaine Region).
Built: 16th century.
Condition: In good condition.
Ownership / Access: --.
Notes: The castle of Fervaques also called Domaine de Fervaques or castle the Kinnor is a building located on the former communes of Fervaques and Cheffreville-Tonnencourt and the new town of Livarot-Pays-d'Auge in the French department of Calvados. Constructed essentially in the sixteenth and seventeenth centuries, the interiors in the nineteenth century were reworked in particular. The elegance of the preserved ensemble gives the estate a role of "testimony of an art of building in Normandy, at the beginning of the classical age".The present castle dates from the sixteenth century and the beginning of the seventeenth century; It was built at the initiative of Guillaume de Hautemer by François Gabriel, master mason ancestor of the Gabriel lineage. However, a building existed in the same place as early as the fifteenth century, the home of which was partly preserved. The fortune of William of Hautemer is due to his marriage, his functions, and also to the proceeds of plunder; It allows him to appeal for the construction envisaged to an architect already renowned carried out from 1595 to 1602. François Gabriel has already worked in particular at the castle of Carrouges.

How To Get To Château de Fervaques (Map):