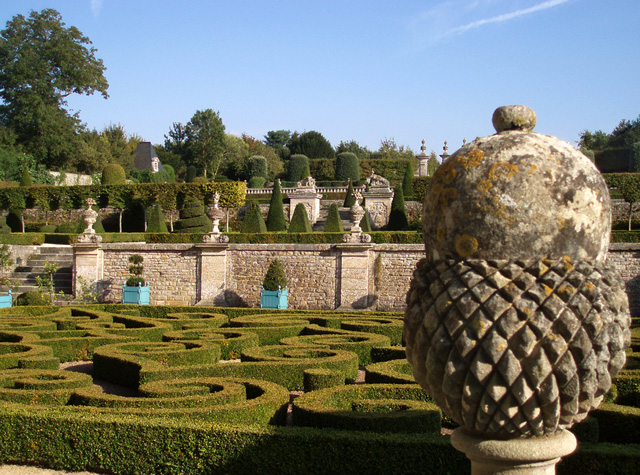 Location: Saint-Gabriel-Brécy, in the Calvados departement of France (Basse-Normandie Region).
Built: 17th century.
Condition: In good condition.
Ownership / Access: Privately owned.
ISMH Reference Number: PA00111666
Notes: Château de Brécy is a castle in the town of Saint-Gabriel-Brécy, in the French department of Calvados in Normandy. Castle Brécy been several classifications as historical monuments, ranking first in September 1903 for the portal and facades, a ranking in February 1914 for domestic and ranking in May 1925 for the closing wall two pavilions of the garden. The monumental portal, richly carved, is the seventeenth century. The pavilions were built in the eighteenth century. The southeast gate at the end of the park, is Isaac Gelin, seventeenth century. The Church of St. Anne of Brécy, the fourteenth century, adjoins the castle and directly accessible through a small door. A few meters from the church, one can see a pond whose water healed the eyes in the Middle Ages, according to legend. Long attributed to Mansart, it was built between 1646 purchase date of Brécy by Jacques I. The Netherlands, and in 1697, when the layout of the driveway. It is a rare example of this type of garden in France. It spreads on four terraces rising above the floor at the rear of the house. The garden blends the medieval and Renaissance influences while announcing classical French garden. It is closely related to the home, a central element of the composition. Sometimes left, sometimes pampered, the Brécy Castle Park was saved in 1958 by Jacques de Lacretelle and his wife who plant the embroidery parterre, topiary install and dig ponds. In 1992, Didier and Barbara Wirth resume work to restore the architectural elements, the garden complete and beautify the surrounding landscape. It has the label "Remarkable Garden".